Police officers and journalists have been attacked by attendees of a far-right rock concert in Saxony in eastern Germany. Far-right groups have hosted several major gatherings in the state in recent years. 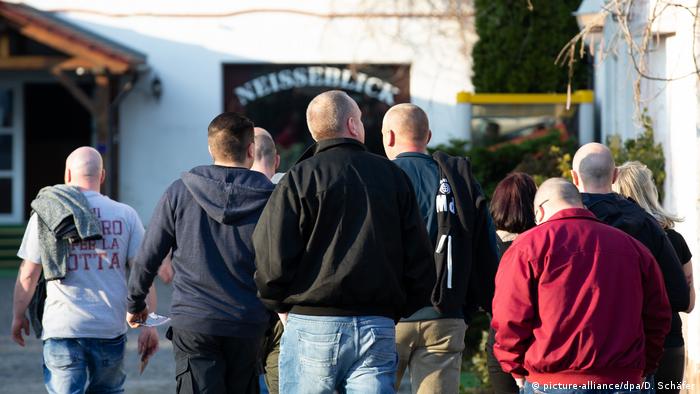 Crowds at a far-right rock concert in eastern Germany threw cups of beer at police and journalists and sprayed them with a fire extinguisher, police said on Sunday.

The journalists wanted to report on the event in the town of Ostritz and had initially been refused access. When they returned with a group of police officers, they were attacked by some of the concertgoers.

The German constitution states that "representatives from the press cannot not be excluded" from such public gatherings.

Investigations were underway on Sunday following reports that some concertgoers displayed unspecified banned symbols and shouted "Sieg Heil" (Hail Victory), a Nazi-era victory slogan. German law forbids the use of any Nazi slogans or symbols in public.

Six people were being investigated for weapons offenses, property damage, verbal abuse and other crimes. 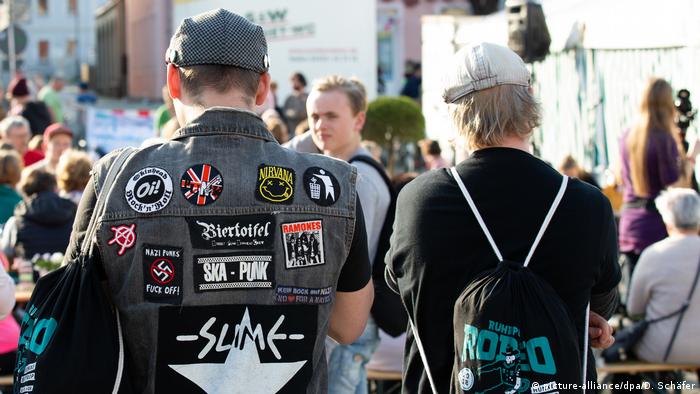 Around 2,000 people attended a parallel peace concert in Ostritz

A parallel peace concert against right-wing extremism was also being held in Ostritz by more than 2,000 locals.

The town is located on the border with Poland and has been the site of several far-right concerts in recent years.

Last April, hundreds of neo-Nazis gathered in the remote town for a festival timed to coincide with Hitler's birthday.

Far-right groups in Germany have witnessed a rise in popularity since the start of a refugee crisis in 2015.

The fatal stabbing of a German man in the eastern city of Chemnitz, which is also in the state of Saxony, triggered large far-right street protests in August amid allegations the perpetrators were asylum seekers.

Some 1,000 neo-Nazi supporters turned up for the second far-right concert in a month in the eastern town of Themar. Experts say the state of Thuringia is a "hot spot" for music tied to the far-right scene. (30.07.2017)

In response to a wave of anti-migrant demonstrations, thousands attended a concert in Chemnitz to protest xenophobia. The line-up included local bands such as Kraftklub, as well as well-known punk band Die Toten Hosen. (03.09.2018)