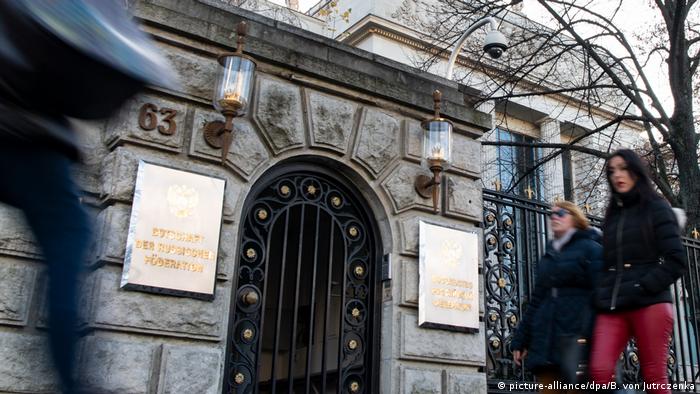 The Russian embassy in Berlin

Germany, Poland and Sweden on Monday expelled Russian diplomats in their countries in response to a similar move by Moscow last week.

Germany declared a member of Russian embassy in Berlin a "persona non grata."

"The Federal Foreign Office today declared 'persona non grata' an employee of the Russian embassy in Berlin," the Foreign Ministry said in a statement. "Russia expelled several EU diplomats, including one at the German embassy. This decision was not justified in any way."

"The German diplomat was merely carrying out his task of reporting on developments on the spot in a legal fashion," the ministry added.

Sweden informed Russia that a Russian embassy staff member would be asked to leave Sweden.

"This is a clear response to the unacceptable decision to expel a Swedish diplomat who was only performing his duties," Foreign Minister Ann Linde tweeted.

Meanwhile, Poland asked a worker at the Russian consulate in the western city of Poznan to leave.

"The Foreign Ministry took the decision today in accordance with the principle of reciprocity and in coordination with Germany and Sweden to recognize an employee of the Consulate General of Russia in Poznan as persona non grata," the ministry tweeted.

Moscow hit back at the expulsions, calling the decision "unfounded."

"Today's decisions by Poland, Germany and Sweden are unfounded, unfriendly and are a continuation of the very series of actions that the West is taking with regard to our country and which we qualify as interference in our internal affairs," Russian foreign ministry spokeswoman Maria Zakharova said on state channel Rossiya 1.

Russia said that the diplomats that it expelled had participated in a demonstration in support of jailed Kremlin critic Alexei Navalny. Berlin, Stockholm and Warsaw reject the allegations, saying their
representatives were at the protests as observers, not participants.

Reports on Russian state TV presented the expelled diplomats as criminals, broadcasting surveillance footage of the protests with the diplomats' faces encircled, together with their full names and functions. "The  Russian side has made it clear that it does not intend to tolerate such a thing," Kremlin spokesman Dmitry Peskov told the Interfax agency.

Ties between Russia and the EU have taken a dive in recent weeks, over Navalny's arrest and jailing, which has sparked nationwide opposition protests.

Navalny was arrested upon returning to Moscow on January 17 after spending several months in Germany recovering from a poisoning attack, with the nerve agent Novichok.

EU Commission chief Josep Borrell is expected to meet with foreign ministers from the 27 EU states on February 22 to mull new sanctions against Moscow. The move would require a unanimous vote among EU members.

Russia's decision on Friday also came as Borrell was meeting with Russian Foreign Minister Sergey Lavrov. Borrell said he learned about the expulsions on social media.

"The messages sent by Russian authorities during this visit confirmed that Europe and Russia are drifting apart,'' Borrell wrote in a blog on his return to Brussels. "It seems that Russia is progressively disconnecting itself from Europe and looking at democratic values as an existential threat.''