The EU's top envoy is meeting with his Russian counterpart in Moscow for the first major diplomatic talks between the two powers in four years. 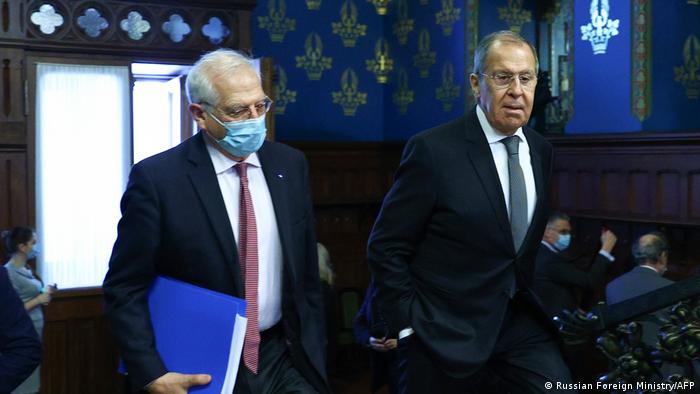 The meeting in Moscow Friday was the first to take place with a high-level EU official on Russian soil in four years.

The two men said they would continue their meeting later in the week with both expressing a desire to keep dialogue channels open.

How could the Navalny case affect relations?

Still, the EU has faced criticism for taking steps towards improving relations with Moscow amid a crackdown against opposition activist Alexei Navalny and his supporters.

"The Navalny case is a low point in our relation," he said. "But despite our differences, to build a wall of silence is not an option."

After the meeting, Lavrov said that both sides agreed that any deteriation in their relationship could have "unpredictable consequences."

He also expressed hope that when EU leaders meet in March to discuss the EU's relationship with Russia, that they will decide for more "constructive, professional and pragmatic relations."

He said that for now, Russia does not see the EU as a "reliable partner."

The Russian foreign minister also continued to cast doubt over the claims from Berlin that Navalny had been poisoned with Novichok.

Borrell told the press after the "frank and open discussion" that: "Over the last years our relationship has been marked by fundamental differences and lack of trust".

He also said he had brought up Navalny's case, saying: "I have conveyed to Minister Lavrov our deep concern and our appeal for his release and for the launch of an investigation over his poisoning,"

What did both sides say before the meeting?

The Kremlin made clear before the meeting that the issue of Navalny's arrest was off the table, however, Russian authorities had also expressed enthusiasm for rebuilding relations with Brussels.

Foreign ministers from around the EU had agreed to meet again on February 22 to discuss "possible further action" if Navalny is not released.

On his blog, Borrell wrote before his trip that while the EU condemns the arrest of Navalny and the repression of recent demonstrations, "Russia remains a neighbor and a key partner with whom we must maintain a dialogue if we really want to become a global player and be able to influence issues essential for our security such as Syria, Libya, Nagorno-Karabakh, Belarus and Ukraine. This is the aim of my visit."

Prior to his meeting with Lavrov, Borrell met with representatives of civil society in Moscow which he referred to in a tweet as "still vibrant despite the shrinking space for independent voices in Russia."

"The EU is & will continue to be the main supporter for civil society projects in the country," he added.

The EU foreign policy chief had originally wanted to meet with the detained Navalny, but his request was rejected.