Despite protests, 14 Afghans deemed dangerous or with criminal status were flown back to Kabul from Bavaria. The send-off marks the 10th round of deportations in Germany since 2016. 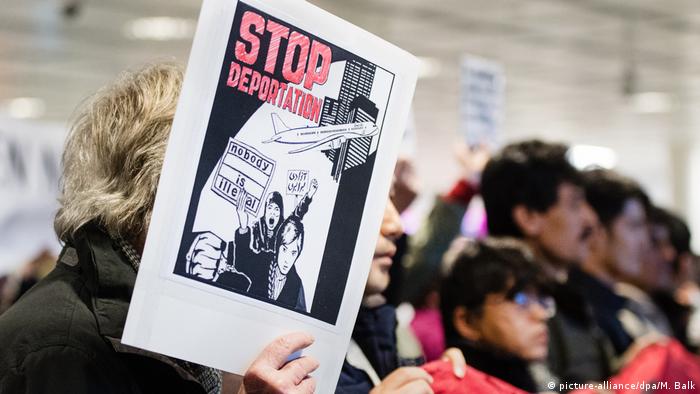 The authorities in Munich carried out a fresh round of deportations of Afghan nationals on Tuesday night. Although Germany's Foreign Office has not submitted a new security assessment for Afghanistan, the deportations are allowed to proceed in the meantime.

The security assessment is at the heart of the controversy over Afghan deportations in Germany, with opponents arguing that the country is still not safe for returnees.

The Afghans were sent back to their homeland aboard a German plane. Although the original list contained 58 individuals, only 14 ultimately flew back. Among them, according to information released by the Interior Ministry on its website, there were six people who had been deemed criminals, three identity thieves, and one dangerous individual.

The Bavarian interior minister, Joachim Hermann, said that "dangerous people, criminals, and identity thieves represent clear security problems in our country." Moreover, authorities are hoping that the deportations send "a signal that the rule of law is being applied."

In 2017, Bavaria carried out the deportation of 3,282 people. In particular, of the 121 Afghans that have been deported in Germany, 56 were from Bavaria.

Tuesday night, in the midst of snow and frigid temperatures, some 200 people gathered in Munich's Marienplatz square to protest the deportation policy, in a rally organized by the Bavarian Refugee Council. The group actively supports "a policy of integration and not deportations," according to their mission statement.

Many people in Germany oppose the deportations because of the current human rights and security situation of Afghanistan, which they say is still too dangerous. A recent UN report puts the figure of civilians killed in 2017 at 10,000.

The Taliban and the "Islamic State" groups are still active and carry out terrorist attacks. In Kabul alone, 20 attacks were carried out in 2017.

Still, the government insists that only people with criminal backgrounds are being deported and that in the end, their main responsibility is to protect their citizens from danger.