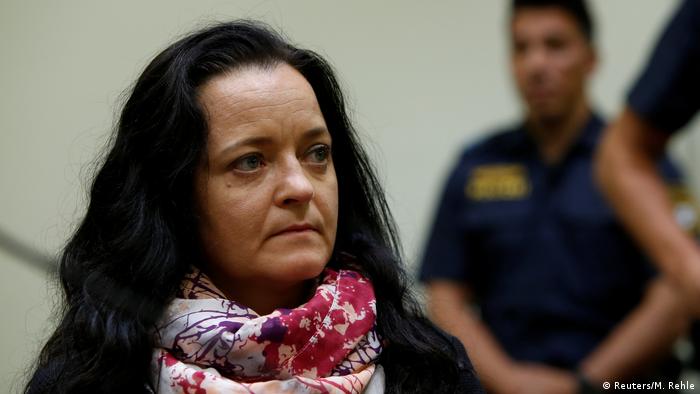 Zschäpe lived with her friends Uwe Mundlos and Uwe Bönhardt for nearly 14 years. Between 2000 and 2007, they killed seven men of Turkish and one man of Greek origin, and a policewoman.

In 2011, Mundlos and Böhnhardt took their own lives to escape imminent arrest following a botched robbery. Zschäpe set fire to a flat they all shared, recording a confession video before turning herself in.

Zschäpe had handled the terror cell's logistics and finances and set up safe houses for them.

While the court did overturn one of Zschäpe's sentences, her conviction was upheld.  The court announced that "the overall life sentence and the particular severity of guilt established have remained unaffected by this."

In a written order, the court determined the sentences against two supporters of the cell, Ralf Wohlleben and Holger G., were also legally binding.

The trial over the neo-Nazi terror cell's murders and attacks came to an end in July 2018 after more than five years and 400 trial days. The April 2020 verdict is more than 4,000 pages long.

Zschäpe was sentenced to life imprisonment as an accomplice in the murders. Though there was no evidence that she herself was present at the scene of the group's crimes, the judges felt that the "particular severity of guilt" required for a life sentence in German law had been demonstrated.

Wohlleben had received 10 years for procuring weapons for the cell and Holger G. three years for providing false identity papers to Zschäpe and the two men she shared an underground life of terror with.

Another co-accused, Andre E, received two and a half years for providing the National Socialist Underground with rail passes in his and his wife's name that bore images of Böhnhardt and Zschäpe instead. He also allegedly rented a mobile home which the cell drove to Cologne to carry out a bombing.

The verdict in his appeal is expected before the end of the year. Prosecutors in his case believe his sentence was too lenient.

Anti-racism activists in Germany have been critical of the German authorities' handling of the investigations into the murders carried out by the group. The terror cell went undetected for years and was only discovered by chance following a botched bank robbery.