Foreign Minister Frank-Walter Steinmeier has advocated lifting economic sanctions on Russia, under certain conditions. Western countries needed to keep up the pressure on Moscow by enforcing "intelligent" bans, he said. 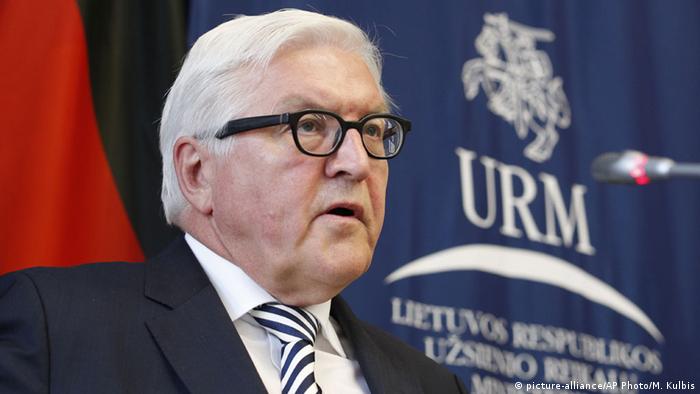 "Sanctions are not an end in themselves: that has always been my attitude," Steinmeier told German weekly "Der Spiegel" in an interview on Friday, adding that if Russia contributes to peace in eastern Ukraine, it should also see a positive effect. "If there is progress in implementing the Minsk agreement, we can also speak about relaxing the sanctions."

Elaborating during a press conference on a visit to Estonia, Steinmeier advocated a "step by step" reduction in sanctions.

"I hope that by the end of June there will be progress and then we can see if we can reduce the sanctions step by step, or if we stay with the measures we have right now," he said. "It is not our aim to maintain the sanctions but to resolve the conflict."

A day before, Steinmeier alluded to the difficulty in extending the sanctions when they expire in July because all 28 European Union members states are required to sign off on them.

While not mentioning any one country by name, it is thought that countries like Italy and Hungary have been the most hesitant to accept an extension. Poland and the Baltic states, however, are anxious about Russia's proximity to their borders and have maintained that sanctions are necessary to put pressure on Moscow.

EU and Western countries put sanctions in place against Moscow after Russia annexed Crimea in 2014, shortly before pro-Russian rebels began waging a war for autonomy in Ukraine's east.

Last year, representatives of the EU, Russia and Ukraine signed an agreement in Minsk to implement a ceasefire and restore peace in eastern Ukraine, subject to conditions including disarmament and the exchange of prisoners.

However, both east Ukrainian rebels and Kyiv's army have broken the truce and engaged in fighting. Sanctions against Moscow were kept in place because of its alleged support for rebels in eastern Ukraine.

The bans were directed at national banks, weapons' imports and exports and the Russian oil and gas industry. In return, Russia banned the import of agricultural products from the EU, which will decide on extending the sanctions in July.

The German minister was a two-day trip to Latvia, Lithuania and Estonia, which have repeatedly expressed fears of a possible attack by Russia. Germany has promised the countries 150 soldiers who will assist NATO troops in securing the region.

Steinmeier will also prepare for a NATO summit in Poland in July, when the bloc plans to deploy 4,000 soldiers in the Baltic countries and Poland to deter Moscow.