A quarter of a century in the making, the new line cuts the travel time between two of Germany's biggest cities to just four hours. The project was the biggest and most expensive of its kind in Europe. 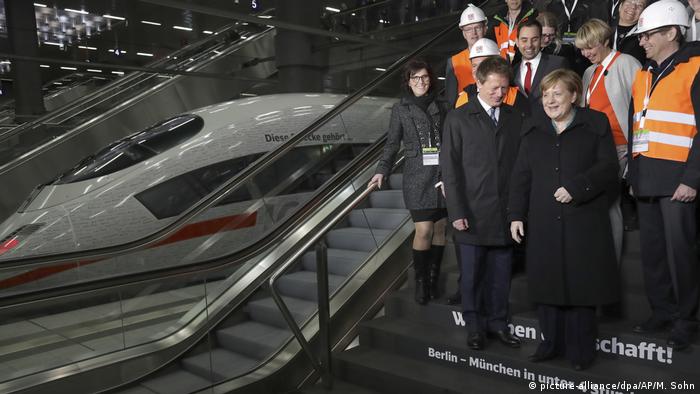 Chancellor Angela Merkel was at Berlin's central train station on Friday to celebrate the inauguration of Germany's new high-speed rail line between the capital and the country's third-most populous city, Munich.

The ceremonial first journey from Munich to Berlin clocked in at just about four hours, two hours shorter than the previous connection.

The project — the biggest and, at roughly €10 billion (around $12 billion), most expensive of its kind in Europe — has been 26 years in the making. Talk of a better connection between Germany's two biggest cities had already begun in the weeks after the fall of the Berlin wall, and has been slowly completed in stages ever since.

Rail operator Deutsche Bahn (DB) expects the number of yearly travelers between Berlin and Munich to double to about 3.6 million.

German broadcaster Deutschlandfunk pointed out, however, that the new mega-project still cannot boast speeds comparable to China's new high-speed rail, though it offered the justification that such speeds are difficult in smaller countries where major cities are closer together.

Celebrating the "most modern route in Germany," alongside Merkel was Christian Schmidt, the agriculture minister who is also overseeing the transport ministry as Germany enters its third month without a new government.

"This milestone in train transport will make Germany an even more important hub," said Schmidt, a member of the Bavarian CSU.

While some environmental activists bemoaned the disruption caused by the building and future use of the track, some argued that it was a positive move for the climate — boasting a four-hour trip from city center to city center, the new train line is expected to cut into the number of travelers taking airplanes between Berlin and Munich.

Authorities have said it is too early to speculate what caused the collision between a freight train and a passenger train near Düsseldorf. The driver of the train was praised, however, for preventing a worse crash. (06.12.2017)