Germany calls for eurozone to unilaterally implement finance tax | Germany| News and in-depth reporting from Berlin and beyond | DW | 17.09.2011

Germany has called for the eurozone to go it alone if necessary and implement a financial tax despite opposition from the US and UK. EU finance ministers, meanwhile, called for European banks to be strengthened. 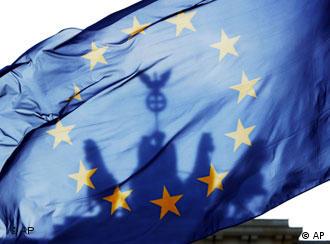 The EU remains divided over a financial transaction tax

Germany's finance minister supports pushing through a tax on financial transactions within the 17 member eurozone currency union in the face of opposition from nations such as the United Kingdom and the United States, two of the world's largest financial markets.

"We plan on setting up a financial transaction tax this fall, if need be only in the eurozone," German Finance Minister Wolfgang Schäuble told the newspaper Bild am Sonntag.

Supporters of the move, such as Germany and France, believe a financial transaction tax would check speculation and slow the growth of bubbles while raising money that could be used to bail out banks in crisis situations.

The European Union, however, remains divided over the measure with non-euro states such as Sweden and Britain expressing opposition. Opponents argue that such a tax would drive business to non-taxed foreign markets. 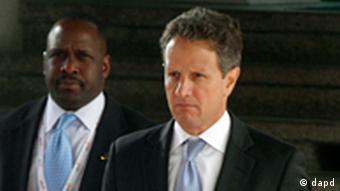 "There is no consensus," said Polish Finance Minister Jacek Rostowski during a meeting of his EU counterparts in Wroclaw over the weekend. "No one expects this element to be a crucial one in our attempts to stabilize the euro."

Although US Treasury Secretary Timothy Geithner called on eurozone states to leverage more money to combat the sovereign debt crisis, he reportedly opposed Schäuble's call for a financial transaction tax.

Geithner, the first US treasury secretary to attend a meeting of EU finance ministers, sparked controversy on Friday when he criticized the EU's handling of the debt crisis and called for more decisive action.

EU finance ministers, meanwhile, agreed that Europe's banks needed to be strengthened in the face of the debt crisis. Ratings agency Moody's had downgraded two French banks, Credit Agricole and Societe Generale, on Wednesday due to their exposure to Greek debt.

In July, a stress test of European banks revealed a financing gap of 6 billion euro ($8 billion).

"From our perspective, we see a clear need for bank recapitalization," Swedish Finance Minister Anders Borg said. "I think the International Monetary Fund spelled that out very clearly. The EU banking system needs better backstops and that's basically a matter of capital."

Geithner presses EU to act as Greece bailout is delayed

US Treasury Secretary Timothy Geithner urged EU policymakers to scale up their rescue fund to tackle the debt crisis and speak with one voice as eurozone ministers delayed a decision on Greece's next bailout loan. (17.09.2011)

In an article published five years before the launch of the euro Martin Feldstein wrote that the new currency could lead to severe friction in Europe. Now the noted economist says several countries should leave the euro. (16.09.2011)

Commentary: A bailout for Europe - with strings attached

Grahame Lucas, head of Deutsche Welle's South Asia Department, comments on the ongoing euro crisis and talks about what could happen should Europe have to turn to the BRICS states for help. (16.09.2011)