The burial of a prominent neo-Nazi's ashes in the same plot as a Jewish musicologist has spurred widespread outcry. Berlin's antisemitism commissioner said "right-wing extremists deliberately chose a Jewish grave." 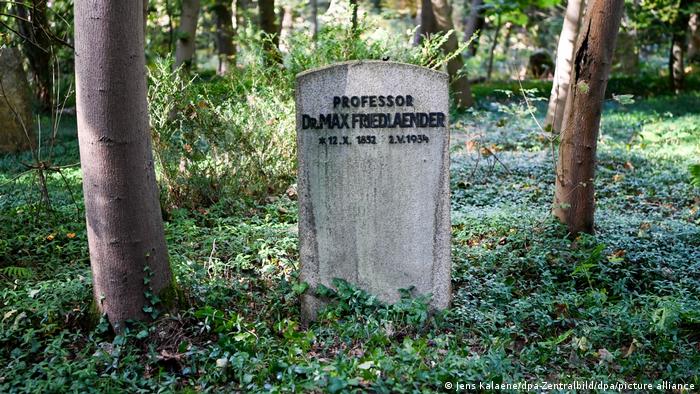 The management of a cemetery just outside Berlin admitted to making a "terrible mistake" on Tuesday after allowing the ashes of a prominent neo-Nazi to be buried in the same burial plot as a deceased Jewish musicologist.

Police were on duty last Friday as mourners buried the ashes of Holocaust denier Henry Hafenmayer at Stahnsdorf South-Western cemetery in Brandenburg. The urn was placed in the gravesite of Max Friedlaender, who died of a stroke in 1934.

In Germany, burial plots are typically reclaimed after leases are not renewed following a period of 10 to 20 years. However, Friedlaender's headstone remained on the plot because it was declared a listed monument.

"The burial of a Holocaust denier on the gravesite of Max Friedlaender is a terrible mistake and a shocking event in view of our history," said Christian Stäblein, the bishop in charge of the local church district. "We must immediately see if we can make up for this, and how," he said.

Berlin antisemitism commissioner Samuel Salzborn said he had filed a criminal complaint on suspicion of disturbing the peace of the dead, disparaging the memory of the deceased and incitement.

During the burial, Friedlaender's gravestone was covered with a black cloth and a sign bearing Hafenmayer's name and a quotation from John 8:32: "And you shall know the truth and the truth shall make you free," British newspaper the Guardian reported. According to eyewitnesses, wreaths and flowers laid for the deceased Holocaust denier have since been taken away.

Additionally, according to a police spokesperson, a man wanted on two warrants was arrested at the funeral during an identity check in the vicinity of
the cemetery.

The man, according to police findings, "apparently belongs to the Reich citizen scene." The Reich Citizens' Movement rejects the legitimacy of the modern German federal republic and claims that the 1871-1945 German Reich is still in effect.

"I am shocked and stunned by what has happened," Stäblein said during a visit to the gravesite at the churchyard in Stahnsdorf.

He promised to "work through this desecration of Max Friedlaender's grave" and said he wanted to "examine all legal steps that could reverse the process."

Police were on duty for Hafenmayer's funeral on Friday, which was attended by dozens of supporters of the Holocaust denier, including Horst Mahler, who had previously been sentenced to six years in prison for incitement of racial hatred against Jews.

This was 'deliberate' says antisemitism commissioner

"The intention here is obvious that right-wing extremists have have deliberately chosen a Jewish grave, to disturb the peace of the dead through the burial of a Holocaust denier," antisemitism commissioner Samuel Salzborn said on Twitter.

The "entire cemetery setting with convicted Holocaust deniers at the burial" calls for a review under criminal law, he added.

The Central Council of Jews in Germany meanwhile called the burial "intolerable." The state government of Brandenburg, where the cemetery is located, called the incident a "fatal mistake."

"The allocation of this gravesite to a Holocaust denier is a fatal mistake and lacks any sense of tact," said Brandenburg Interior Minister Michael Stübgen.

'Nazis should be excluded from church cemeteries'

The antisemitism commissioner of the Evangelical Church in Germany, Christian Staffa, said that it was now a question of removing the urn and relocating it, and whether to cancel the lease and develop future criteria for who can be buried in church cemeteries.

"Nazis and Holocaust deniers should be excluded from it if they have not signaled repentance before their death," said Staffa.

The Southwest Churchyard in Stahnsdorf is Germany's largest Protestant cemetery. According to the regional church, the decision regarding the request for a gravesite was made by the church administration.

"The guiding principle here is that every person has a right to a final resting place," a church spokesperson said. However, an initial request made by Hafenmayer's attorney for a more centrally located funeral plot was rejected over fears that the cemetery would become a meeting space for right-wing extremists.