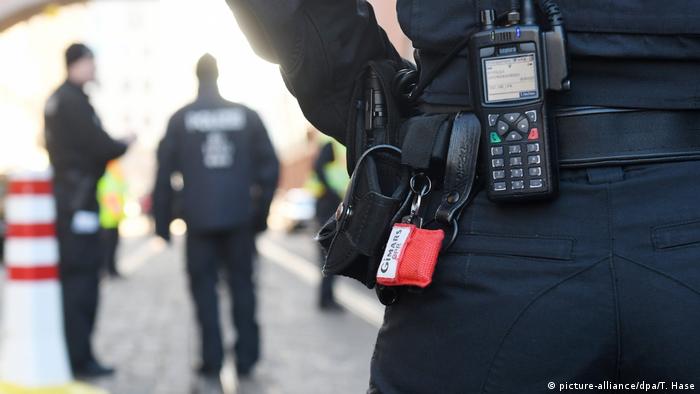 Top of the agenda at this week's meeting of the Federal Criminal Police Office (BKA) in Wiesbaden was the increasing prevalence of hatred and violence in German society — especially from right-wing extremists.

The recent wave of violence now poses a "threat to democracy itself," according to BKA President Holger Münch. In October, a suspected anti-Semitic neo-Nazi extremist attempted to storm a synagogue in the eastern city of Halle, killing two people during the ensuing rampage. And in June, the pro-immigration regional politician Walter Lübcke was shot and killed by a neo-Nazi extremist.

There has also been a rise in right-wing extremists individuals who authorities suspect may be planning deadly terror attacks. In 2012, the BKA had been monitoring four such individuals, but today it is keeping tabs on 46. Münch warned that "the far right poses a pernicious and growing threat," adding that statistically, there are three acts of far-right violence every day.

Horst Seehofer, who as Germany's interior minister is in charge of the BKA, did not attend the summit. He was in Berlin this week for 2020 state budget discussions in the German parliament, the Bundestag. There, Seehofer managed to convince lawmakers to provide Germany's security apparatus with extra funding and personnel. The federal police, domestic intelligence service (BfV) and BKA will benefit most from this extra money. The latter, in particular, will receive an additional €65 million ($71.5 million), boosting its total budget to €800 million, which will allow it to hire 810 new staffers.

Halle attack came 'out of the blue'

Many of them will now be tasked with monitoring and combating Germany's far-right. BKA President Münch said that increasingly, right-wing extremists are committing acts of violence "seemingly out of the blue," without previously having aroused the suspicion of German authorities. The Halle attacker, for instance, had never been their radar. Many individuals like him are radicalized online, anonymously and globally. That's why German security agencies want to expand their cooperation with their foreign agencies.

Mike Bush, New Zealand's Commissioner of Police, spoke at the BKA conference about how the Australian Christchurch attacker had gone online to prepare for his massacre at two mosques — which he then livestreamed. The parallels with the Halle attack, where the uniformed perpetrator also livestreamed his actions, are striking.

Münch hopes to thwart attacks like these by being able to "swiftly launch in-depth investigations" online. Just like police officers patrol streets, Münch wants his agents to also "patrol" the internet.

But that could prove an almighty undertaking in the short term, as one IT expert at the conference made clear. Just 1% of German security officials are tasked with monitoring cybercrime — in the Netherlands, by contrast, 4% of officers are scanning the net for criminals and extremists.

Münch nevertheless expressed optimism, saying the planned increase in funds and personnel would allow his agency to better tackle hate crime and violence. And while he was elaborating on his strategy for achieving this, Interior Minister Seehofer received cross-party support for his tough stance on far-right extremism.

Konstantin von Notz, a security expert with Germany's opposition Green party, sided with Seehofer, arguing that "we need to take action." He urged the Interior Ministry to create a special task force to address the far-right danger. Indeed, Seehofer himself already suggested something along these lines in cooperation with the Justice Ministry and the Family Affairs Ministry after the Halle attack, when he presented a nine-point plan to combat far-right extremism.

Should school leavers spend a year doing national service? The new leader of the Christian Democrats has cautiously floated the idea. Other European countries have reintroduced conscription, for a variety of reasons. (28.11.2019)

A former police commando in Germany has gone on trial for stockpiling weapons for his right-wing prepper network. Marko G. is thought to have collected and stolen 55,000 rounds of ammunition in preparation for "Day X." (20.11.2019)