A former police commando in Germany has gone on trial for stockpiling weapons for his right-wing prepper network. Marko G. is thought to have collected and stolen 55,000 rounds of ammunition in preparation for "Day X." 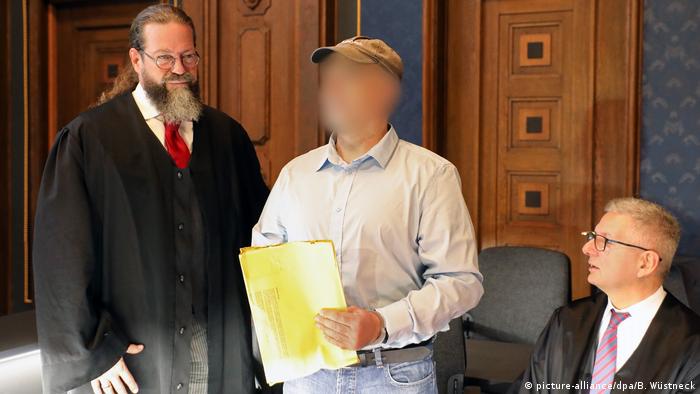 A former special police unit commando accused of "prepping" for a breakdown of society went on trial in the northeastern German city of Schwerin on Wednesday.

The 49-year-old defendant Marko G. is accused of breaking war weapons and weapons control laws, as well as fraud, by illegally hording and stealing weapons from the German military, offenses which carry a prison sentence of up to five years.

This marks the first trial in a wide-ranging police investigation into a network of around 30 far-right "preppers" who allegedly horded body bags and drew up lists of mainstream politicians as potential targets. One member of the network, Franco A., is also under investigation for planning to carry out a terrorist attack.

According to a prosecutors' statement, in January 2016 Marko G. founded chat groups on the messenger app Telegram named "NORD KREUZ" ("Northern Cross") and "NORD Com," whose members believed that German society could collapse through war, natural disaster, or economic catastrophe: an event they described as "Day X." 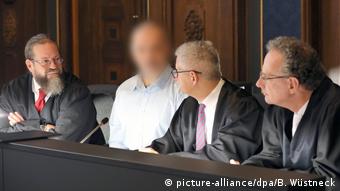 Defendant Marko G. is alleged to have founded the Nord Kreuz network

Prosecutors said that Marko G., whose past in the German police force's SEK armed commando unit made him the group's firearms expert, was given the job of acquiring weapons. A search of his home in August 2017 turned up 23,800 rounds of ammunition plus several weapons, the statement added.

Officers also said they found 18 rounds of ammunition classified as "war weapons," which are therefore illegal to own privately. The defendant is also accused of keeping many of the weapons and ammunition in unlocked places, which is also illegal.

In a subsequent search two years later of Marko G.'s home and a bungalow he had access to, officers said they found a further 31,500 rounds of ammunition, as well as several explosives, including around 1,400 rounds of rifle ammunition classified as war weapons. The statement also said the officers found an Uzi machine gun that had been stolen from the German military in 1993.

The trial that began on Wednesday hopes to determine which of the weapons Marko G. owned legally.

There is evidence to suggest this is only the visible part of the Nord Kreuz prepper network. Marko G. is just one of several suspects currently under investigation: Three more state police officers are suspected of stealing ammunition from police stores, with some 14 properties in the northeastern state of Mecklenburg-Western Pomerania searched earlier this year.

The RND local newspaper network reported in June this year that members of Nord Kreuz had ordered 200 body bags and quicklime, and accessed police databases to collect the personal details of politicians considered political enemies.

Also on the list, as the taz newspaper reported, was the anti-racism foundation the Amadeu Antonio Stiftung (AAS), whose spokeswoman Simone Rafael said that while preppers were not by default far-right, there were "overlaps" between the two scenes.

"And there is a very concrete threat," Rafael told DW. "We are dealing with people who are ideologically entrenched, who are clearly against democratic order, and that is of course a very frightening situation."

However, speaking to the local Märkische Allgemeine newspaper in 2017, members of Nord Kreuz described themselves as people with a "healthy conservative attitude" who simply collected supplies in anticipation of a major disaster.

But Rafael argues that the mixture of the prepper and far-rights scenes is a symptom of a general spread of extremist right-wing views beyond hardcore neo-Nazi networks such as Combat 18. "We are seeing there are quite a lot of people who have anti-democratic, far-right views," she said. "And we are seeing that a lot of these people are becoming radicalized. We're dealing with a lot more people who are prepared to commit bombings or attacks with weapons."

The case of Franco A.

Nord Kreuz was initially uncovered as part of an investigation into the hair-raising case of Lieutenant Franco A., a Bundeswehr soldier with far-right sympathies accused in February 2017 of planning to trigger social unrest by carrying out a "false flag" terrorist attack while posing as a Syrian refugee.

That case was dismissed by a court in Frankfurt for lack of evidence earlier this year, but that decision was this week overturned by a federal court, which admitted the state's case against Franco A., meaning his trial may begin in the coming months.

Meanwhile, news magazine Der Spiegel reported last Friday that it had found an even larger, separate network of far-right preppers on the Russian social media site VK. The self-described "survival group," which included some 3,500 registered users, shared prepping tips including legal and illegal ways to acquire weapons. Some users reportedly used the platform to fantasize about murdering black and Arab people.

Police are investigating a death threat to Cem Özdemir, the former co-leader of Germany's Green party. A US neo-Nazi group was linked to the email, which featured the politician among a list of its assassination targets. (02.11.2019)

Germany's domestic intelligence service has identified the country's Identitarian movement as an extremist entity. The group, which claims to defend European identity through ethnopluralist ideology, has gained traction. (11.07.2019)