One active and three former state-level police commando members have been arrested in northeastern Germany and 14 premises searched. Three are accused of diverting ammunition to the doomsday 'Prepper' scene for years. 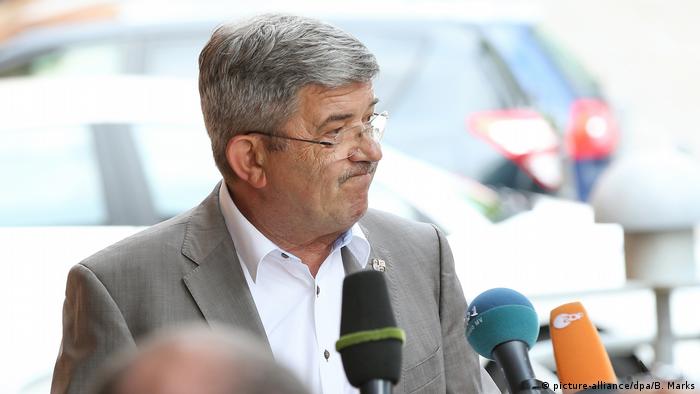 Charges of breaching Germany's War Weapons Control Act, its civil arms law and fraud had been laid against the four accused, said public prosecutors in Schwerin, the regional capital of Mecklenburg-West Pomerania (MV) state on Wednesday. All the officers worked for the state's arm of the SEK.

Lorenz Caffier (pictured above), Christian Democrat (CDU) interior minister in the state's grand coalition cabinet headed by Social Democrat Manuela Schwesig, said he was "profoundly shocked and bewildered" by the turn of events and promised an "airtight" investigation.

Regional prosecutors, acting on findings of a 2017 probe by federal prosecutors, effected the arrests on Wednesday as well as searches of 14 premises [homes and offices] at five locations across MV — Chancellor Angela Merkel's home state, where the far-right is active.

The four accused would probably appear before a custodial magistrate on Thursday, said a spokeswoman for Schwerin's prosecutions office.

Spezial Einsatz Kommandos (SEK, special operations commandos) are maintained by each of Germany's 16 regional states (Länder), with similar bodies at the national level using different names. They have a reputation for precise interventions using tactical weapons and sophisticated vehicles such as helicopters, not entirely dissimilar to SWAT teams in the US.

The 2017 federal prosecution's probe was focused on "Nordkreuz" (Northern Cross), a far-right survivalist "Prepper" group which reportedly aimed to stash supplies for a post-apocalyptic scenario.

Allegations date back to 2012

Nordkurier, a newspaper in the region, said three of those arrested Wednesday were accused of starting to remove munitions from their workplace, the state's LKA criminal investigations offices in Schwerin, as long ago as 2012.

The munitions were then handed to the fourth accused, who, according to prosecutors, then forwarded these to persons in the "Prepper" scene.

Reacting on Wednesday, Interior Minister Caffier said the four arrested did not epitomize the Landespolizei (regional police), adding that he was ready to brief the interior committee of state assembly in Schwerin on Thursday.

The opposition Left's interior affairs spokesman Peter Ritter, quoted by the Nordkurier, said over the past two years his party had sought clarification on Nordkreuz in Schwerin's parliament only to be fobbed off with excuses, delays and references to investigations by prosecutors.

Given the accumulation of incidents, questions should be asked on whether Interior Minister Caffier was in control of his department, said Ritter.

May 2019, Caffier plays down far-right

Presenting the annual report by Mecklenburg-West Pomerania's intelligence service in Schwerin last month, Caffier had said the far-right scene was no longer so active as in past years across the Baltic coast state, which to the east borders with Poland.

Of 872 extreme right-wing motivated crimes in 2018, 43 were classified as acts of violence. A total of 89 crimes were attributed in the report to the left, said report's authors, while also warning that Islamist-style attacks could not be excluded.

Mecklenburg-Western Pomerania is home to seaside resorts once nicknamed "Berlin's bathtub," and is ideal for waterside holidays - from the Baltic Sea coast to the Mecklenburg lake district. (02.05.2019)

The opposition Greens have hit a record high in a new opinion poll, pulling ahead of Angela Merkel's conservatives. The center-left SPD have dropped even further, slipping behind the far-right Alternative for Germany. (06.06.2019)