How can Germany better protect its synagogues? | Germany | News and in-depth reporting from Berlin and beyond | DW | 11.10.2019

How can Germany better protect its synagogues?

A wooden door was all that stood between worshippers and a neo-Nazi terrorist bloodbath at a German synagogue on Judaism's holiest day. Leaders of Germany's Jewish community are asking for better protection. 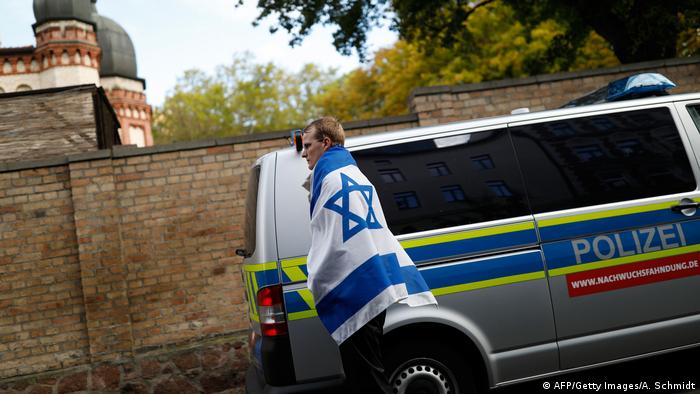 Splinters protrude from the heavy wooden door of the synagogue in Halle. The lock is peppered with bullet holes — but the door did not open. If it had given way, the assailant could have carried out a massacre.

Behind the door, some 80 people were gathered for Yom Kippur, the most important holiday of the Jewish year.

"I first had to comprehend what was happening," said Max Privorozki, the leader of the Jewish community in the eastern German city. Privorozki then called the police as members of the synagogue moved furniture to block the door and fled towards the kitchen in the interior of the building, away from the bullets.

Privorozki said it took more than 10 minutes for a police car to arrive on the scene.

The splinters and bullet holes are traces of Wednesday's attack on the Jewish community in Halle. After the right-wing extremist terrorist failed to gain entrance to the building, he shot two people dead. First, it was a woman in front of the synagogue and later a man at a nearby snack bar.

Killings could have been prevented

So why was there no police protection at the synagogue in Halle on Yom Kippur? Many Jewish institutions across Germany do have a police presence.

"In Halle, in Saxony-Anhalt, it is normal to have constant contact with the police," said Privorozki.

"But the police said it was sufficient to drive by sporadically — I am not sure how often. They told me, 'Just because you don't see police, doesn't mean that the police aren't there.'"

If just one police officer would have been guarding the synagogue, the perpetrator would have been immediately disarmed, said Josef Schuster, president of the Central Council of Jews in Germany in an interview with Deutschlandfunk radio.

That would have been enough to prevent the two murders.

"Obviously, the situation there hadn't been recognized and assessed properly in advance," said Schuster.

However, the synagogues will also need to be better protected structurally, in addition to having security personnel present.

"This government will do everything so that Jews in our country can live without threat and without fear," promised Seehofer, adding that he wants to add hundreds of jobs in the Federal Office for the Protection of the Constitution and the Federal Criminal Police.

Different levels of protection for Synagogues

In Germany, police work comes under the responsibility of the federal states. However, more is done in other states than in Saxony-Anhalt for the protection of synagogues.

Take the federal state of North-Rhine Westphalia for example. A state Interior Ministry spokesperson told DW that there is always a high level of police protection at Jewish institutions like schools and synagogues.

The spokesperson said that after the attack in Halle, there have been more officials on duty than before.

"The institutions are guarded 24 hours a day, seven days a week."

In front of the synagogue in Cologne, this protection comes in the form of a VW police van. Today, just like nearly every other day, it is parked in front of the tuff stone building crowned with the Star of David.

This place of worship is protected from the street by concrete blocks. And with heavy iron gates, and neo-romantic ornamental turrets, the synagogue slightly resembles a fortress. Today, there are flowers lying by the door.

North-Rhine Westphalia also does more for synagogue security than stationing police officers. The state has signed an agreement with the Jewish community, which includes €3 million annually for security in the form of thicker doors, security cameras, and even panic rooms where people can retreat in case of danger.

Flowers and police in Berlin

In front of the New Synagogue in the heart of Berlin, the scene is similar to that in Cologne. This Thursday, just like every day, there is a police officer guarding the building.

People passing by have laid flowers to commemorate the victims of the attack in Halle. An old woman in front of the synagogue tells DW she is there to take part in a vigil that she had heard about, but ended up not taking place.

"Somebody really needs to do something," she says. "Politicians aren't doing anything. On October 3, [German reunification day] Neonazis were allowed to march, and people like me were left standing helpless on the sidewalk."

A young man who works for the Catholic Church is also visiting the synagogue on Oranienburger Street, as a sign of solidarity. "This has been in the air for a long time," he said, adding that the Jewish community is in more danger now than in recent years.

Read more: Opinion: The world must wake up to the horror of anti-Semitism

"When society is divided and polarized, then the question always comes up: What about the Jews?"

Visitors from abroad, however, seem less perturbed about the situation of Jewish people in Germany. An elderly Jewish couple from Australia visiting the synagogue in Berlin said they were glad to see police.

"We are happy that Germany takes responsibility to protect synagogues," the man said.  His wife added that in their country, schools and synagogues also need to be protected by police.

A young couple from London said they were shocked by the attack in Halle, but the woman added they were enjoying their visit and had not felt unsafe at all.

Israel Ben-Ami Welt, Crisis Manager of the Jewish European Congress (EJC), told DW that it is absolutely necessary to protect synagogues in Germany.

"For Jewish communities here in Germany the situation is very complicated," said Welt.

"On the one side, there is the extreme right, which is very strong, and on the other, jihadis are also very present. Many of them have returned from fighting in Iraq and Syria."

As far as the obligation of authorities to provide protection, Welt said: "This isn't the Jewish community's problem, this is Germany's problem."

"We expect from the authorities that every synagogue in Germany be protected during prayers", said Teichtal. "When people go to pray they should not be afraid and know that they are protected."

Read more: Rabbi spat on and cursed at in Berlin

However, this is about more than just protection from murder and manslaughter. Teichtal said he was spat on and verbally abused this summer when he was on the way home from synagogue with his children.

Anti-Semitic attacks like this are showing up more and more in German police reports. Many consider these kinds of attacks as a breeding ground for more extreme acts of violence like what happened in Halle.

Following a visit to the synagogue in Halle, German President Frank-Walter Steinmeier said, "All of society needs to maintain a stance of decisive solidarity with fellow Jewish human beings in our country — and not only after events like this."