A lighthearted, first-day-of-school atmosphere settled inside the historic Reichstag building in Berlin on Tuesday, as Germany's 20th legislative period began with a five-hour session in the Bundestag.

Chancellor Angela Merkel was present, but watching from an unfamiliar vantage point: the spectators' gallery, alongside Germany's head of state, President Frank-Walter Steinmeier. Though she remains in office, Merkel's normal seat at the front of the government benches was empty — waiting to be filled by a successor currently being negotiated in the ongoing coalition talks. 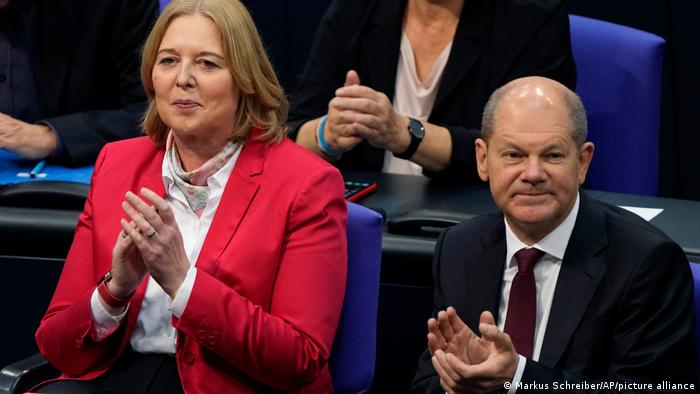 The morning session was led by outgoing Bundestag President Wolfgang Schäuble (formally the second-highest office in the country, after the federal president), who held a much-anticipated valedictory speech.

"If we want to strengthen the principle of representation," he told the delegates, "then we must continually work toward the big, controversial debates. The parliament is always also a political stage, and not just a formal event to work through coalition contracts. The parliament is the space where the diversity of opinions can openly be aired."

"This is all the more important since it seems in our society that the readiness to tolerate opposing opinions, to allow contradictions, is declining," he added.

Schäuble, by far the longest-serving member with almost half a century of Bundestag experience, also had a few words for the 279 new faces in the chamber. "Extraordinarily fulfilling work is waiting for you, and at the same time a strenuous and all-consuming time, for all the political elan," he said. "This requires work on a public stage."

Some 27 new seats had to be fitted into the chamber in the month since the election, with a total of 736 parliamentarians, a new high, now to be accommodated.

The new parliament is also younger and more diverse, though it still cannot be said to accurately reflect the German population. With an average age of 47, this is the youngest Bundestag in decades. Some 34% of the parliamentarians are female, a higher proportion than the last parliament, though not higher than the one before.

Around 11% of the members are of immigrant background, the highest proportion ever, but still lower than the 26% in the German population.

Fittingly, Tuesday's agenda included the dawn of an era: the election of a new Bundestag president. The winner, with 576 votes to 90, was the well-regarded Social Democrat nominee Bärbel Bas, a health policy specialist and only the third woman ever to take up the office.

"I see my election as a change in the times," she said in her opening speech, before chairing the remainder of the sitting. "It does our country good for citizens to see a woman taking responsibility in the heart of our democracy. I am the third woman [to take this post] since 1949 — that is not a glorious sign." 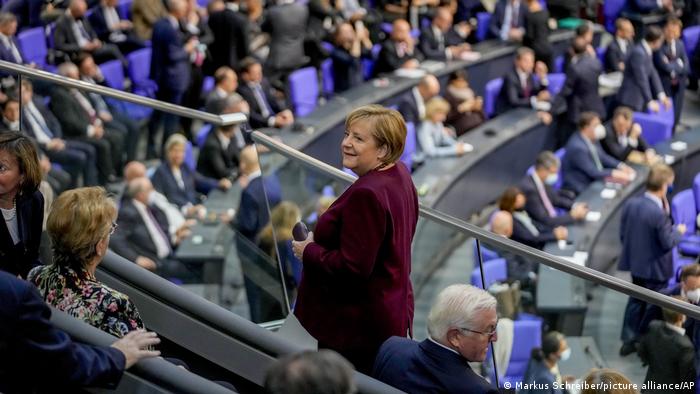 Outgoing Chancellor Angela Merkel sat in the visitors' section, as she is no longer a member of parliament

Wrangling with the far right

The morning session began with an intervention from the far-right Alternative for Germany (AfD), many of whose parliamentarians were forced to join the debate from a separate gallery reserved for those who refused to disclose their vaccine status.

The AfD demanded that the session be led, as tradition dictates, by the oldest Bundestag member — their very own former parliamentary leader, 80-year-old Alexander Gauland. The motion was, as expected, overwhelmingly voted down by the other parties.

But the wrangling with the AfD dominated the day's business, particularly as the delegates debated who would be elected Bundestag vice presidents. Here, too, the AfD felt its right to appoint a vice president was being overridden by the other parties. As expected, their candidate Michael Kaufmann, who had previously filled the role in the Thuringia state parliament, was the only one not to be elected. The candidates for the CDU, the Greens, the FDP and the Left Party were all elected, and notably enough were all women — with the one exception of the FDP's Wolfgang Kubicki. Meanwhile, Germany's two center-right parties engaged in a minor power play over who would have to sit next to the AfD in the next legislative period.

Until now, the Free Democratic Party (FDP) has occupied the seats just to the left of the AfD, but with its new ambitions to government power — the party is engaged in coalition talks with the SPD and the Greens — the FDP is still hoping to shunt the Christian Democrats (CDU) over to the right so it could move its group into the center. So far, the conservative CDU, likely to be the largest opposition party in this parliament, has successfully resisted the move.

The Bundestag is the biggest parliament in Europe, and, after the National People's Congress in China, the second-largest in the world.