Germany awakes to a crescent sun

The first solar eclipse of the year was seen over skies in Europe on Tuesday morning. In Germany three quarters of the sun was blocked by the moon, creating a crescent sun. 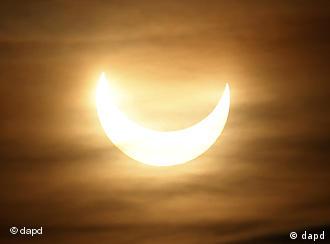 Cloudy weather obstructed the view for some people

The first partial solar eclipse of the year was enjoyed across parts of Europe, Africa and Asia on Tuesday morning.

"You have to get lucky," said Helmut Malewski, a meteorologist for the German Weather Service (DWD) as reports came in of patchy cloud cover hiding the sun altogether.

At 9.27 a.m. local time (0827 UTC) the eclipse appeared in Berlin, which was one of the best places in Germany to view the eclipse with almost 74% cover. The eclipse wasn't enough to make the skies visibly darker.

By 10.52 a.m. local time the sun over German skies had resumed its usual shape as a big round ball.

A solar eclipse happens when the moon lines up between the sun and the Earth. This casts a lunar shadow on the Earth's surface and obscures the solar disk. During a partial solar eclipse, only part of the sun is blotted out. 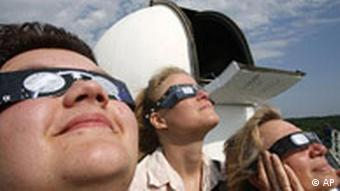 The greatest eclipse was observed from Sweden, where about 85 percent of the sun will be blocked.

Officials have warned that people should not look directly at the sun during the eclipse as this can damage eyesight. Many eclipse enthusiasts have been using special solar sunglasses to protect their eyes.

The next partial solar eclipses this year will take place on June 1, July 1 and November 25, but none of them will be visible from central Europe.

Astronomy enthusiasts in Germany will have to wait until March 20, 2015 until the next partial eclipse, although a partial lunar eclipse is predicted to be observable from Europe in December 2011.

The European Union is investing nearly two million euros in the ESAIL project, which was initially conceived of by a Finnish researcher. Now, the project has four other EU member states on baord. (10.12.2010)

Don't Expect Too Much of Next Solar Total Eclipse, Says Expert

Avid sky watchers will be heading to the far North on Aug. 1 this year to witness a total eclipse of the sun, but an expert in Germany has warned people not to expect too much from the astronomical show. (31.05.2008)