Germany has asked EU members to help trace demonstrators who vandalized property or attacked police at the Hamburg G20 summit. More than 50 suspects from seven countries have been detained. 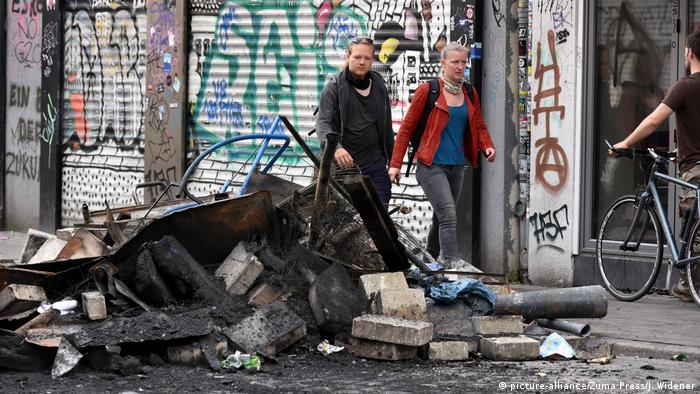 "Lots of photos and video footage is now being analyzed in order to name those perpetrators," Maas wrote. "For that, we're reliant on the support of our European partners."

The same day, Maas took to Twitter to further his call for better information-sharing across Europe and reiterated that no form of extremism would be tolerated.

Interior Minister Thomas de Maiziere, of Chancellor Angela Merkel's ruling Christian Democrats (CDU), compared protesters to "despicable violent extremists - just like neo-Nazis and Islamist terrorists." De Maiziere said hundreds of people had traveled to Hamburg from abroad for the protests, and that the police force he oversees had turned away hundreds more at Germany's borders. He said he expected judicial authorities to pass tough sentences on the demonstrators and added that "breaching the peace" could result in prison sentences lasting several years.

Fifty-one people face charges for breaching the peace, causing grievous bodily harm, damaging property and resisting the more than 20,000 police officers who had been on hand. As well as Germans, those held include citizens of France, Italy, Spain, the Netherlands, Russia, Switzerland and Austria.

Nearly 500 police were injured, a few of them seriously. The Hamburger Abendblatt newspaper reported that more than 200 protesters sought treatment in local hospitals and noted that scores more received on-the-spot care from volunteer medics.

German leaders say protesters who committed vandalism or resisted police amounted to hundreds of the tens of thousands of people who were present to demonstrate against the G20 talks. The leaders also emphasized their belief that the worst offenders came from abroad. Nonetheless, officials at several levels of government have called for the eviction of cultural centers for domestic dissidents.

CDU officials have called for raids on Hamburg's Rote Flora (Red Flora), a converted theater that served as a meeting point for some protesters and during less exceptional weeks hosts bicycle repair clinics and support groups for people recovering from addiction.

"In light of the excessive violence and the dimension of unrestrained and unleashed aggression against police officers, as well as the vandalism on the part of extreme-left demonstrators and autonomists, I consider the forcible eviction of the Rote Flora to be imperiously imperative," said Stephan Mayer, the domestic policy speaker for the CDU in the Bundestag.

Officials have found it less imperative to respond to the German Federation of Journalists (DJV), which demanded clarification as to why several reporters were stripped of accreditation, insulted, threatened, and subjected to tear gas, pepper spray, billy clubs and other physical violence by officers. In a letter to the Federal Criminal Police, the DJV called the attacks on journalists isolated cases - "but," chairman Frank Überall has since said, "there were an awful lot of isolated cases."