Berlin′s leftist scene under pressure after G20 violence | Germany | News and in-depth reporting from Berlin and beyond | DW | 10.07.2017

The G20 riots have put new political pressure on leftist centers like Rote Flora in Hamburg and Rigaer 94 in Berlin. But they remain protected by the law. 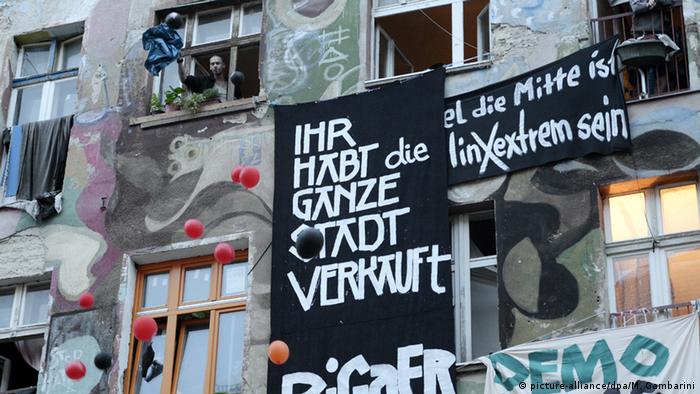 The G20 riots in Hamburg last weekend have increased political pressure on the leftist scene in Germany. Justice Minister Heiko Maas told the Bild newspaper that it was time for a European-wide extremist database - and perhaps even a "Rock against Left" concert to go with the "Rock against Right" concerts that have become a staple in Germany.

Other politicians are weighing in by calling for well-known leftist housing projects and cultural centers around the country to be "shut down."

The latest voice to offer this idea came from Armin Schuster, a Bundestag member for Angela Merkel's Christian Democratic Union (CDU) and a former policeman, who told the Berliner Kurier newspaper on Monday that "left-wing centers like Rote Flora in Hamburg, or Rigaer Strasse in Berlin, need to be systematically closed down." 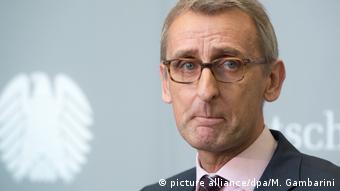 Armin Schuster said it was time to shut down Rigaer 94

Germany should not tolerate any "lawless spaces, either for Arab clans, Islamists or neo-Nazis, and not for left-wing radicals either," Schuster added, before going on to criticize the German judiciary, as well as left-wing political parties, of going soft on such hotbeds.

The CDU's parliamentary faction chimed in with their own statement on Monday afternoon. "In Hamburg we saw once again what extreme violence can spring from the left part of the political spectrum," deputy parliamentary leader Stephan Harbarth wrote. "Extremist prevention needs to be reframed, autonomist centers must be shut down."

But Rigaer 94 itself is apparently not particularly perturbed at the sudden political ire being directed its way. "I don't know if the mood there has changed, but I don't expect it has," said the group's lawyer Lukas Theune. "It won't be cleared - the apartments there all have rental contracts."

Rigaer 94 is at the center of an ongoing legal dispute over the Kadterschmiede, a bar and venue on its ground floor, which was illegally cleared - with the protection of Berlin police - last year, but for which there is no rental contract. 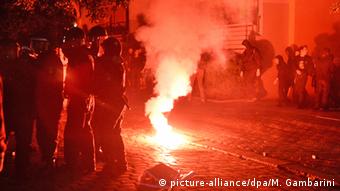 At the moment, the case appears to have been caught up in red tape. Attorney Markus Bernau, representing the building's owner, whose identity is unknown because they are acting through a British shell company called Lafone Investments Limited, failed to produce his power-of-attorney at a hearing in February - because, he said, his office had been burglarized (he strongly suspects this was not a coincidence).

"The Berlin government and the police certainly won't be helping to clear the building illegally a second time without a court officer," said Theune. "That would be an absolute violation of the rule of law."

But Theune also had no time for the CDU's contention that the Berlin judiciary had been soft on leftist centers in the nation's capital. After all, he pointed out, another such place, on Friedelstrasse 54, was forcibly cleared just two weeks ago with the help of riot police armed with chainsaws to cut through barricades built up by protesters.

In that case, the building's owner - a Luxembourg shell company - was able to get a court order to clear the building. "I don't know exactly what [Schuster] means by saying [the judiciary is soft]," he said. "The judiciary helped the owners in that case, against the will of large parts of the Berlin population, and supported them with a major police operation, with police dogs, with pepper spray, with armored vehicles - that definitely was not going soft on them."

Two newspapers noted that the Verfassungsschutz, the German domestic intelligence agency tasked with tracking groups deemed a threat to the constitutional order, believed that a "high three-figure number" of Berlin's estimated 940 "left-wing extremists" had traveled to Hamburg ahead of the G20 summit.

Theune wasn't happy with the Verfassungsschutz's definition. "I have absolutely no truck with this term 'left-wing extremists'," he said. "I consider that a political battle cry. Certainly people came from Berlin - as they did from the rest of Germany and Europe - to Hamburg to demonstrate against this meeting of the G20 leaders. They were very different people with very different motivations - but I don't agree with the divisions, that one part are so-called 'left-wing extremists' who just wanted a riot, and others are peaceful demonstrators."

Theune, who was in Hamburg to represent people who had been arrested, said that the police did not make the distinction either when they were arresting people. The police operation, he said, "affected a lot of people." Though he did not have exact figures, he believes that hundreds of demonstrators were seriously injured.

Germany has strict laws protecting freedom of assembly - but also strong regulations on how it may be implemented. DW explains what is allowed and what is against the law. (10.07.2017)

The scandal around Patricia Schlesinger, former head of Berlin-based broadcaster RBB, has refocused attention on Germany's complicated network of public broadcasters. Here's how they're organized.