Germany apologizes to the UN for NSU murders

Germany has apologized at the UN for mistakes made while investigating the NSU murder series, which were allegedly committed by a neo-Nazi trio. German leaders have publicly apologized for the way the case was handled. 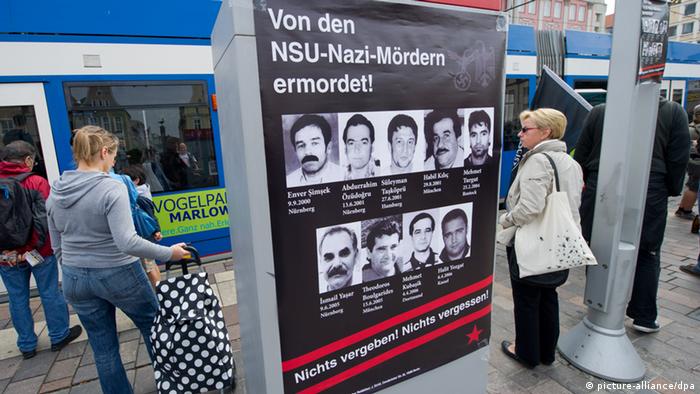 Germany's chief human rights officer, Markus Löning, told the council that the NSU murders were "without a doubt one of the worst human rights violations in Germany in the last decade.”

A Munich court will reallocate press passes for the neo-Nazi NSU terror cell trial accused of killing 10 people, eight with Turkish heritage. Turkish media had previously not received any seats in the courtroom. (19.04.2013)

"I want to repeat this apology explicitly in this forum," Löning said. "Prosecution authorities failed to identify the motives and therefore did not catch the murderers."

Berlin has publicly apologized to the victims' families for the police detectives who failed to spot and connect clues of neo-Nazi involvement and for also treating the families as potential suspects during the investigations. Other suggestions included that the killings might have been linked to organized crime. The case either directly or indirectly led to leadership reshuffles in Germany's federal domestic intelligence agency - and in some of its regional branches.

The neo-Nazi cell, the National Socialist Underground (NSU), is accused of murdering 10 people between 2000 and 2007 - eight of them with Turkish roots, a Greek locksmith and a German policewoman. The group was only uncovered in 2011. The sole surviving alleged core member is set to go on trial on May 6.

Löning's apology came in response to Turkish UN envoy Oguz Demiralp, who said that the roughly 3 million people of Turkish origin in Germany have been troubled by a rising level of xenophobia. He advised Berlin to step up measures and to take resolute action against right-wing extremism and xenophobia.

Delegates from other countries also asked critical questions about xenophobia and discrimination in Germany, as part of the routine four-yearly process.

The UN Human Rights Council has 47 member countries, but all 193 UN member states may submit questions during the review.

The council will now make recommendations by next week, which Germany may accept or reject. After the first hearing in 2009 Germany accepted 34 of the 44 recommendations.

Turkey was also critical of Germany during a recent controversy involving a lack of accreditation for foreign journalists for the NSU trial, specifically Turkish media. In response, Germany's Constitutional Court ordered the Munich court earlier this month to reserve "a suitable number of seats for representatives of foreign media with particular consideration to the victims of the alleged crimes."

US militias want to 'blow up' Capitol, police chief warns 0m ago

Niger: 2 killed in protests against election results 1h ago