Twenty years after the rights of homosexual servicemen and women in the Bundeswehr were first protected, the German Cabinet has approved a law that will see those who faced discrimination receive compensation. 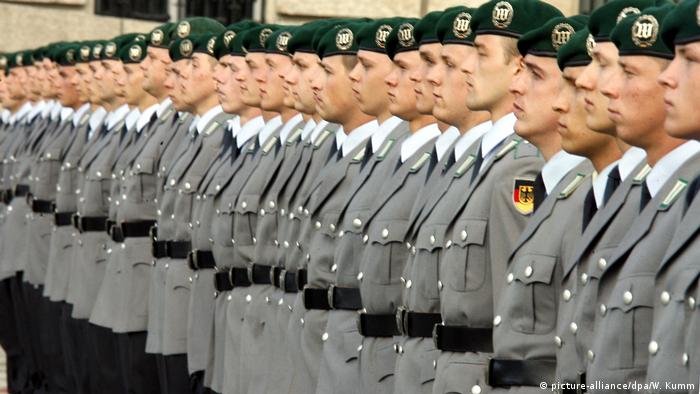 Homosexuals who faced discrimination in the German military before 2000 will have their records cleared and given financial compensation, the German Cabinet agreed on Wednesday.

The approval from Chancellor Angela Merkel's Cabinet came two months after Defense Minister Annegret Kramp-Karrenbauer issued an official apology for decades of discrimination and published a study documenting "systematic discrimination" in the Bundeswehr from 1955 to 2000.

"We cannot makes amends for how these people have suffered, but we want to set an example where possible," Kramp-Karrenbauer told German media ahead of the Cabinet announcement.

The legislation will lift military court verdicts imposed for consensual gay sex with a symbolic sum of €3,000 ($3,590) in compensation being paid for each of those verdicts.

Those who were dismissed, passed over for promotion or stripped of responsibility will also be eligible for compensation.

The defense ministry estimates that around 1,000 people will apply.

Sven Bäring of the Bundeswehr's LGBT+ group, QueerBW, said the body welcome the announcement, but believes the legislation could go further.

"Coming to terms with the injustices that have occurred is an important step towards an open working atmosphere. QueerBW therefore welcomes the draft law on rehabilitation," he told DW.

"But there is a need for improvement," he added. "Those affected were no longer promoted, partially dismissed or deprived of their pension. The considerable financial damage caused by the German armed forces significantly exceeds the proposed €3,000. The armed forces must now show responsibility for this."

Chris, a former soldier who was subjected to medical examinations when he came out as gay in the West German army in the 1980s, also expressed doubts about the compensation payment.

"I am relieved that the good intentions will now be followed by action in the foreseeable future," he told DW. "But the lump-sum compensation will not always do justice to the extent of individual injustice. Rehabilitation and compensation of lost earnings and pension claims would be appropriate."

Defense Minister Kramp-Karrenbauer said the legislation will also cover people who experienced discrimination in the communist East Germany's National People's Army, which ceased to exist in 1990.

Homosexuality was illegal in Germany until the 1960s and gay servicemen and women in the armed forces could legally be discriminated against on the grounds of their sexuality until 2000.

The legislation must still be approved in the Bundestag, the German parliament, where Merkel's center-right CDU and their coalition partners, the center left Social Democrats hold a majority.

Kramp-Karrenbauer added that she hopes the legislation will "close this dark chapter in the history of the armed forces."

German defense minister: Europe still depends on US for security