Germany and France push for closer economic coordination in eurozone | Europe | News and current affairs from around the continent | DW | 17.08.2011

Germany and France push for closer economic coordination in eurozone

France and Germany have called for closer coordination on economic policy in the eurozone, saying they want balanced budgets enshrined in all eurozone constitutions. But markets had hoped for more decisive action. 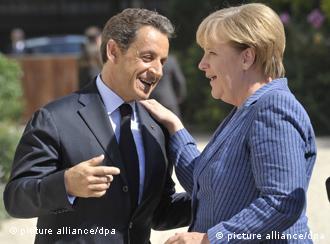 Sarkozy and Merkel held talks at the Elysee Palace in Paris

Following the meeting, Merkel and Sarkozy called on all 17 eurozone nations to be more responsible in managing their budgets in order to reduce the common debt. They proposed that all eurozone member states should commit to balanced finances and enshrine that goal in their constitutions.

Among other measures, Sarkozy announced that France and Germany would seek to ensure better cross-border coordination via twice-yearly meetings, and advocate the creation of a two-and-a-half-year presidency to steer that forum. European Council President Herman Van Rompuy should be the first person to hold the post.

The leaders emphasized that all eurozone member states would have to work together to improve economic governance. 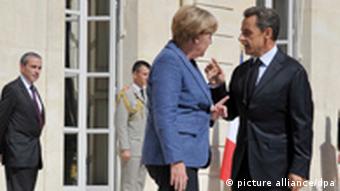 Both leaders want closer cooperation in the eurozone

"We want to express our absolute will to defend the euro and assume Germany and France's particular responsibilities in Europe and to have on all of these subjects a complete unity of views," said Sarkozy. Next month, the two countries are planning to urge their European Union partners to adopt a tax on financial transactions.

"The German and French finance ministers will put a joint proposition for a tax on financial transactions on the table of European institutions from next month," Sarkozy told reporters.

In a joint statement with the EU's economy commissioner, Olli Rehn, Barroso said the measures were a step toward "a more stable and stronger political leadership.

"The challenges we are facing have made even clearer that a shared currency implies shared responsibility and demands closer coordination of economic policies," they added. 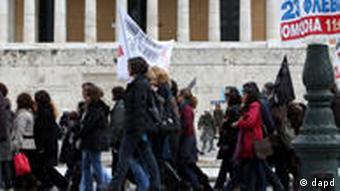 Countries like Greece have seen constant protests against austerity measures

The talks came amid mounting fears that the eurozone could be sliding back towards recession, with statistics released Tuesday showing that Germany, Europe's biggest economy, grew only 0.1 per cent in the second quarter.

The figures caused further dismay, days after France's economy was shown to have stopped growing altogether in the second quarter.

The two leaders have been under pressure to come up with plans to shore up the eurozone and restore financial market confidence after a year and a half of turmoil that has refused to die down despite bailouts of Greece, Ireland and Portugal and the creation of an anti-contagion fund.

Tuesday's meeting took on added significance after markets went into a tailspin last week over concerns about rising borrowing costs for Italy and Spain, a downgrade of the United States' credit rating and speculation that France could be the next to lose its AAA rating.

The tumult, which forced the European Central Bank to intervene by buying up Spanish and Italian bonds, has led to calls for greater economic integration in the eurozone, with stronger economies shielding the weak.

Across Europe, support is growing for the creation of eurobonds, which would see countries with the euro effectively guarantee each other's debt.

Eurobonds were, however, not up for discussion at the summit on Tuesday, although Berlin is said to oppose such a move.

"I don't think the eurobonds would help us today," Merkel said, when prompted by reporters.

German newspaper editorials on Wednesday were mostly in favor of plans by the French and German leaders for closer eurozone integration, calling them "a step in the right direction." (17.08.2011)

Long after the bailouts of Wall Street and Greece, the US and EU face an escalating debt crisis. Political gridlock on both sides of the Atlantic prevents the implementation of controversial but necessary solutions. (15.08.2011)