A German art-activist collective has apologized after a public outcry over a "tasteless" memorial it erected in Berlin that claims to contain the ashes of Nazi victims. "We made mistakes," the group said. 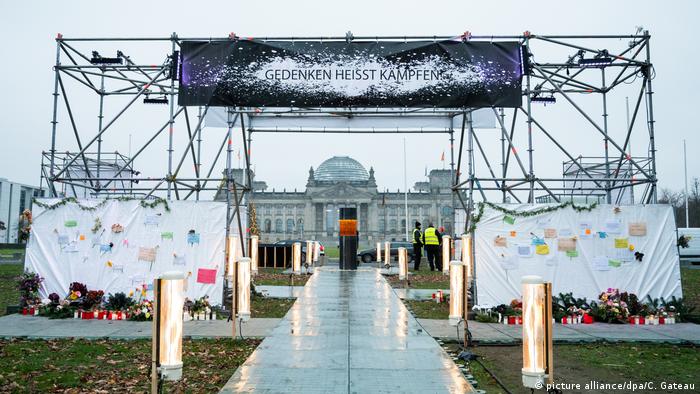 German art-activist collective the Center for Political Beauty (ZPS) apologized on Wednesday for an art installation that allegedly held the ashes of Nazi victims. The memorial was erected by the group in front of the German parliament on Monday, as a warning to Chancellor Angela Merkel about the dangers of cooperating with far-right parties.

"We would like to apologize to all those affected, relatives and survivors, whose feelings we have hurt," the ZPS announced in a statement on its website, admitting it had "made mistakes."

"We would like to apologize, especially to Jewish institutions, societies or individuals who believe that our work disturbed the peace required for the dead under Jewish law," the statement added.

An event planned for Saturday has been canceled, but the ZPS has not confirmed the fate of the memorial or the ashes, saying in the statement that the group would welcome suggestions for what an appropriate resting place for the human remains would be.

As questions continue to be asked about the future of Merkel's coalition government, there are concerns that her center-right CDU party may break their promises and work with far-right party Alternative for Germany (AfD) in the future, the far-right AfD is currently the third-biggest party in the German parliament.

The so-called "Resistance Column," which contained soil samples from the sites where "Nazis perfected and industrialized mass murder," had received a barrage of criticism, not least from Jewish communities.

"From a Jewish perspective, the Center for Political Beauty's latest campaign is problematic because it violates Jewish religious law about not disturbing the dead," President of the Central Council of Jews in Germany Josef Schuster told DW in a statement. He said it would have been wise for the group to consult with a rabbi before taking the soil samples.

The president of the Munich Israel Cultural Society, Charlotte Knobloch, said the action "was meant to be provocative but is in fact only tasteless, tactless and irreverent."

The ZPS also claimed in their statement to have heard from many relatives of those murdered by the Nazis and members of the Jewish community who welcomed the artwork and the message they were trying to impart. 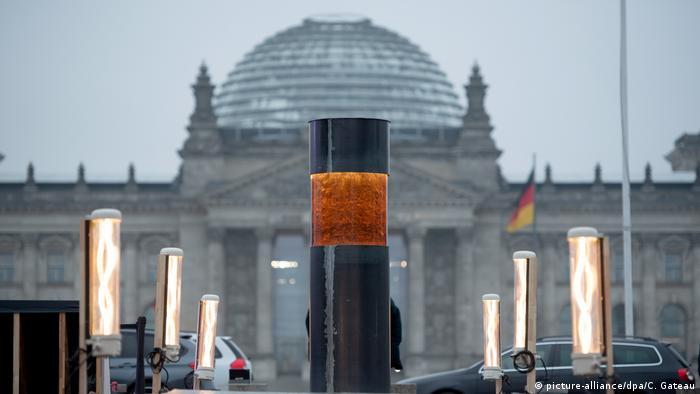 How was the memorial created?

The Center for Political Beauty previously said it collected over 240 samples from 23 locations across Germany as well as in previously Nazi-occupied areas in Poland and Ukraine.

Lab results found traces of human remains in over 70% of the samples, the group said in a statement.

The samples were taken from areas near Auschwitz, Sobibor, Treblinka and other sites of Nazi German concentration camps where the ashes and remains of victims were spread in nearby fields and rivers.

At Auschwitz-Birkenau, the largest Nazi death camp, over 1.1 million victims — including some 1 million Jewish prisoners — were killed. The ashes of hundreds of thousands of bodies were disposed of in the lakes and grounds surrounding the camp.

The artists' collective is known for its headline-grabbing protest pieces — particularly for setting up a replica of Berlin's Holocaust Memorial outside the house of AfD politician Björn Höcke in 2017.

Earlier that year Höcke dubbed the memorial in Berlin as a "monument of shame" and has called for a reversal of Germany's culture of remembrance surrounding the Holocaust.