A German art activists' collective is planning to put a tank in front of the Saxony state parliament in Dresden in protest against the AfD. But the city authorities have denied the requested permit. 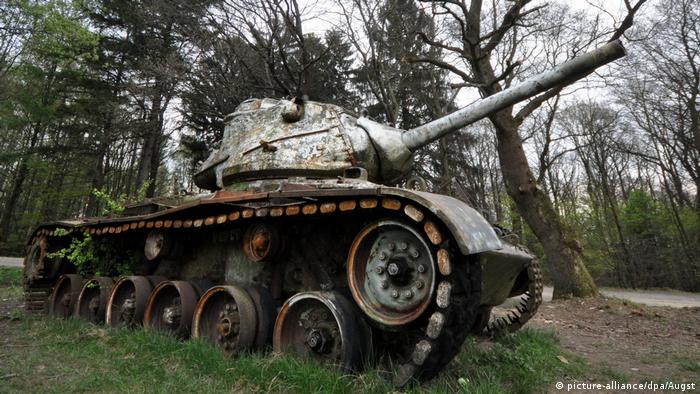 German art activists' collective Zentrum für politische Schönheit (Center for Political Beauty) has said it would go ahead with its plans to place a decommissioned tank in the center of the Saxony city of Dresden, as a protest against the far-right party Alternative for Germany (AfD), despite a ban by authorities.

The collective previously made headlines when it erected a replica of Berlin's Holocaust Memorial at the home of AfD MP Björn Höcke in late 2017.

Saxony is facing a state election on Sunday, and the far-right AfD is polling in second place, behind Angela Merkel's conservative Christian Democratic Union (CDU), despite repeated scandals linking its leaders and prominent members to neo-Nazi networks.

According to Radio Dresden, city authorities have denied the application to place a 13.5-ton DP-90 vehicle in front of the state parliament, but a spokeswoman for the campaigners said: "After careful consideration, and in the face of the costs and what is at stake for the future of democracy should the AfD become the strongest power on Sunday, we have decided to put the tank outside the state parliament anyway."

She added that the activists had informed authorities of their decision, and argued that, since the tank represented the location of their demo, they considered the ban a limitation of their freedom of assembly.

Ahead of the action, the leader of the collective, Philipp Ruch, said the tank represented a "symbol of the defense of democracy and civil society."

The Dresden police, meanwhile, have already said they would tow away the military vehicle if there was no valid permit.

The city's authorities said the planned protest violated regulations about the misuse of decommissioned military weapons, though similar actions have been allowed in Berlin.

The artist collective Center for Political Beauty had been under criminal investigation for nearly 500 days. Now the proceedings have been dropped, but the artists call for further inquiries to guarantee freedom of art. (08.04.2019)