The small brass "stumbling blocks" are familiar to anyone who has walked the streets of Germany. Each one commemorates a victim of the Nazi regime, and now the 75,000th stone has been laid in a small Bavarian town. 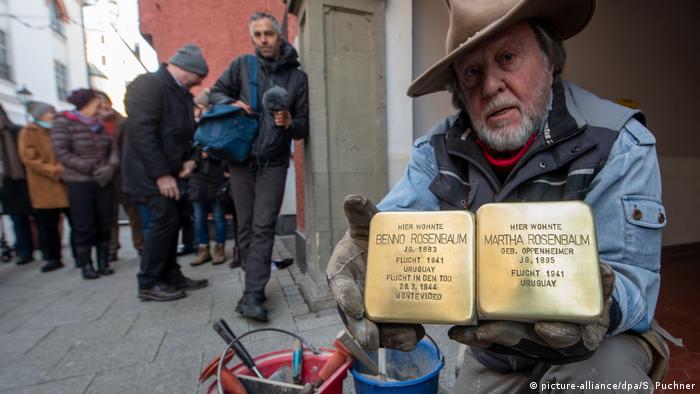 The artist Gunter Demnig installed the 75,000th "Stolperstein" or "stumbling stone" in Germany on Sunday to memorialize the Jewish family Rosenbaum, who were persecuted under the Nazi regime, the Stolperstein Society said.

"Stolpersteine," literally "stumbling stones" or "stumbling blocks," are small brass plaques inserted into sidewalks and roads throughout Germany and the rest of Europe to preserve the memory of victims of the Nazis.

Each stone features the name of a victim and some short biographical information. German artist Gunter Demnig began the project in 1992, and has since seen the stones become part of the landscape, with 75,000 now laid. The first stone outside of Europe was laid in 2017, in Argentina.

The words "Here lived..." begin almost every stone, giving the passer-by who may quite literally "stumble" across any of the stones a personal connection with the victim.

"It doesn't matter what form of memorialization you think is best — by commemorating names and the biographical information then we remain aware of the victims," he added. 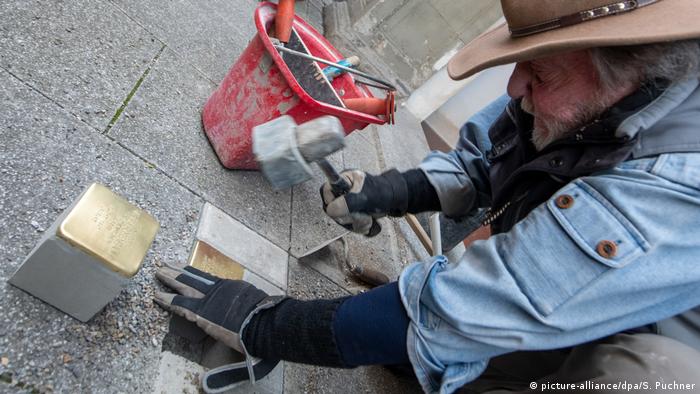 The town of Memmingen in Bavaria has seen about 100 stones installed since 2014. These stones were laid at the home of Martha and Benno Rosenbaum, who fled Nazi persecution to Uruguay from Memmingen in 1941.

Distraught at leaving his home town and by the seeming endless reign of Nazism, Benno died in 1944, one year before Hitler.

The stumbling stones can be found in 1,250 towns and cities all over Germany. Despite recently turning 70, Demnig has shown no indication that he plans to end the project any time soon.

Jan Bazuin wrote a diary about his experiences during the Nazi occupation of the Netherlands, including his time as a forced laborer. Now published as a book, his testimony will also inspire a new app.