The suspected attacker reportedly stabbed passersby indiscriminately and without warning in the city center. Police have said a motive is still unclear, but an Islamist connection is not being ruled out.

Three people have been killed in a knife attack in the city of Würzburg in Bavaria, around 120 kilometers (74.5 miles) east of Frankfurt, police said on Friday.

Five people were severely or very severely injured, some who may not survive, said Bavarian Interior Minister Joachim Herrmann. A number of others sustained less serious injuries, he added.

Lower Franconia Police announced that they had detained the suspected attacker.

"There is no indication of a second suspect. There is no danger to the population," the police tweeted.

What we know about the suspected attacker

Investigators are looking into the motivation for the attack. According to a police spokesperson, the suspect is not known to the police for crimes that "lean in the direction of Islamic extremism."

"Naturally, we need to compile all the evidence that we can," the spokesperson added.

Herrmann said that he is not excluding any possibility: "In any case, there is circumstantial evidence that this could have been an Islamist attack."

Herrmann cited a witness who alleged that the attacker had shouted the common Islamic phrase "Allahu Akbar," which means "God is great."

'Respect the victims' by not sharing videos, urge police

Police urged people to refrain from speculation and not to share videos of the incident on social media after footage emerged, appearing to show the attack. 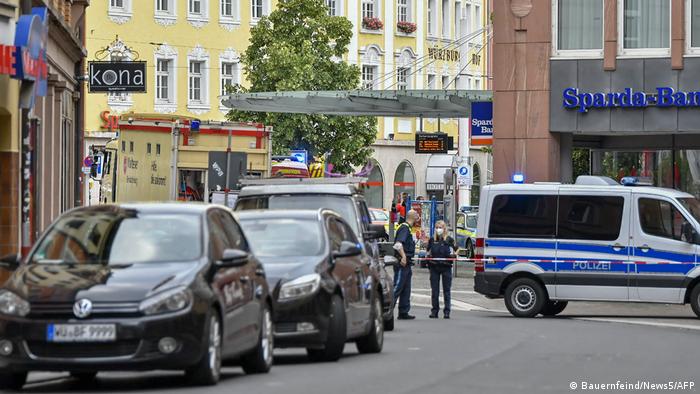 The area around the attack has been sealed off

One video showed pedestrians surrounding the suspected attacker and holding him at bay with chairs and sticks.

"Respect the privacy of the victims," the Lower Franconia police force tweeted, adding that more information will follow.

Bavarian State Premier Markus Söder described the incident as terrible and shocking on Twitter. He added: "We mourn with the victims and their families. We share fear and hope with the injured."

He also thanked the police for their quick intervention.