Germans turned off by tap water

Germans love their bottled water. Tap water largely plays second fiddle, and public drinking fountains are a rarity. But some Germans are trying to wean their countrymen and women off the bottle - and onto the tap. 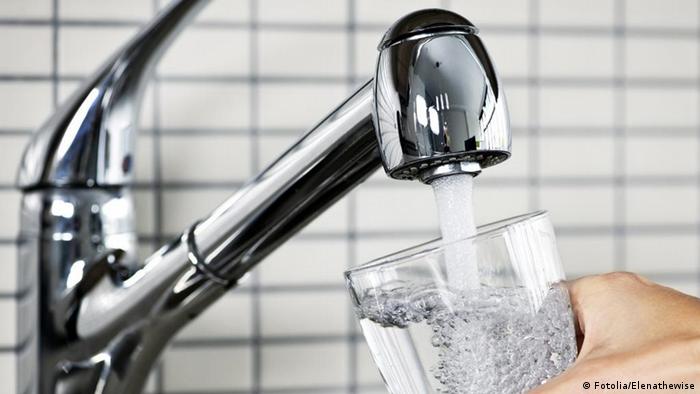 Germany is on the whole an environmentally friendly country. People recycle fervently, have an active Green political party, and many favor organic or regionally grown food.

But Germans also adore bottled water, which is often pricier than beer. Supermarkets are flooded with choices - fizzy, still, or mineral enriched, while tap water plays second fiddle, though it is good, clean and highly regulated. 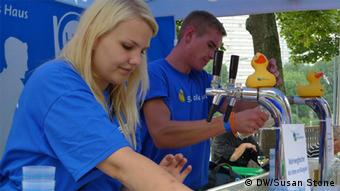 Berlin's tap water could give Evian a run for its money

To change this, a group of faucet fans has gathered at Berlin's Wasserfest, the water-themed festival run by the capital's water company.

At one booth, Samuel Höller is offering up some cool water to the visitors passing by on this unusually hot day. He gives them two unmarked glasses to try. One is French bottled water, the other Berlin tap, or Leitungswasser, as it is known in German.

Höller smiles as another drinker votes for Berlin's best. His European water initiative, called "A Tip: Tap" is trying to discourage consumption of bottled water.

But not everyone is on board. Just steps away, Mohammed Nassar pulls a large bottle of mineral water from a tiny backpack, and takes a swig.

He says he knows Berlin's water is clean and safe - but that it's also boring.

"I just really like sparkling water - that's my problem," he says ruefully. "So I tend to avoid tap water," despite the extra cost.

But the water company is prepared for Germany's many friends of fizz, and they have also provided cool, free carbonated tap water today. At a picnic table, Claudia Fonn cautiously sips a cup but doesn't look convinced. Her family runs on bottled water, and it's her job to keep them quenched.

"Yeah, it's a lot of work, schlepping drinks around for the whole family," she says. "And then three days later, my kid says ‘ooh, so many empty bottles.' And I say, 'yep.'" 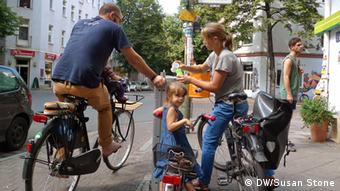 With bubbles or not, most Germans prefer the bottle

Fonn recycles the plastic bottles - glass would be too heavy - and insists she's helping the environment, not hurting it. Besides, she requires bottled water on hand for people who visit her home. Fonn says she wouldn't even serve tap water to a thirsty workman - it would be downright rude.

"I mean, simply turning on the tap, and saying, 'Here?' That's like … giving him animal feed. The poor workman, he'll never come back!" she laughs.

She also needs bottles for her daughter to take to school, she explaines - there are no water fountains there. In fact, you rarely see any drinking fountains in Germany, not in airports, train stations, or libraries.

"A Tip: Tap" hopes to change that. They've spent two years getting a public drinking fountain built on a corner in the Berlin neighborhood of Neukölln - one of only 18 in the city. The group is still struggling to pay the maintenance fees and the costs of removing the fountain so it doesn't freeze during the city's harsh winters.

Lena Ganssmann from "A Tip: Tap" says she grew up drinking bottled water, but now she asks for tap everywhere. In restaurants and bars, the response is more often a stony stare than a fresh glass - they're adamant they'll lose beverage profits. After all, mineral water often costs more than beer.

"It does take me a bit of courage every time," she says. "But I think that's the way forward. When there's demand for tap water, I think it will sort of solve itself. Because it works in America, it works in France - why not here?"

No need to save water

In Germany, there's water, water everywhere, but not enough is drunk - or, in Berlin, used in any way, says Jens Feddern who oversees the city's water supply.

Berlin's water system was built to serve a much larger population and industry; both declined dramatically after German reunification. On top of that, Feddern points out, water usage is dropping each year, partly due to water-saving washing machines, showerheads and dishwashers. Prices rise as usage falls. 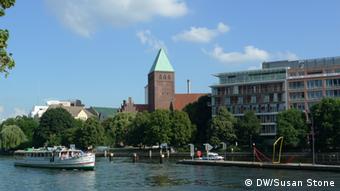 According to Feddern, Berlin has too much water

"In Berlin itself, there is no need to save water," he insists.

Because not enough water is being used, Feddern says, the ground water level is rising in Berlin, and in some areas of the city, cellars stay wet. There's also not enough water circulating through the system, which means sewage sediments build up and start to stink, requiring extra cleaning.

"If you want to save something,you should save CO2," opines Feddern. "It's not necessary to buy water in bottles, put it in a car, drive it home, then climb up the stairway with 20 kilos of water. This makes no sense because we deliver it for a fee, directly to your tap."

"This Leitung, this pipe, this tap. This water work - these are technical things we talk about. Manufacturers of mineral water - they never talk about their technique," he muses. "They talk about their nice bottles, they talk about behavior, how you can use the water in order to feel well. Therefore we have to learn a little bit to go in this direction."

Feddern's Berlin water company is currently part private but may soon revert wholly to public hands. This spring, the upper house of the German parliament voted against a European Union plan to allow privatization in this sector, holding the view that water should belong to the people - whether they want to use it or not.

Farmers in Austria and Hungary are rethinking climate change as a bitter drought tears through their fields. How will they grow food if the weather is so unpredictable? (16.08.2013)