Workers building a memorial to victims of communism in Estonia have discovered a World War II-era German war grave. Authorities in Estonia said that the bodies would be re-buried in a nearby German cemetery.

Estonian laborers working in a park near the capital Tallinn on Tuesday discovered a World War II German military cemetery.

The construction site was a future memorial to the victims of communism. Work came to a halt when the remains of around 100 German soldiers were found.

The director of the Estonian War Museum Arnold Unt, speaking on Baltic television, said that the bodies would be re-buried in a German cemetery nearby.

Estonia was absorbed by the Soviet Union and intermittently occupied by Nazi forces during World War II.

- How Nazis courted the Islamic world during WWII 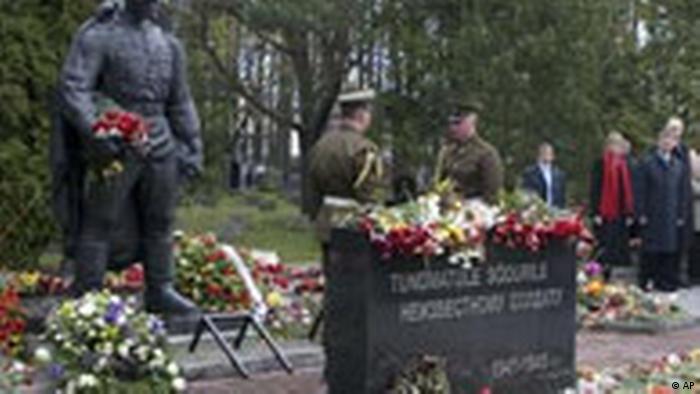 During the war an estimated 35,000 German soldiers lost their lives in Estonian territory.

Starting in 1995, the German War Graves Commission established military cemeteries in Tallinn and many other places in Estonia.

In 2007 Estonia moved the remains of Russian soldiers as well as a Russian war memorial out of Tallinn despite Russian protests.

When the Cold War ended, Estonia was one of the first republics to leave the Soviet Union. It is now a member of the European Union and the Western military alliance NATO.

Germany's and Russia's foreign ministers have visited the graves of soldiers who died in the World War II Battle of Stalingrad in Russia. It comes as pro-Russian separatists continue to occupy parts of eastern Ukraine. (07.05.2015)

A Russian hacker group said it carried out the attacks after Estonia removed a Soviet-era monument. Estonia said the impact of the "most extensive cyberattacks" it faced in 15 years was limited.

Music and song are an integral part of the identity of Estonia, which for centuries has been under Russian rule, first under the czars and then the Soviet Union.