A German retail trade association has criticized customers for ignoring coronavirus safety rules. It warned that a second lockdown would be a deathblow to many struggling retailers. 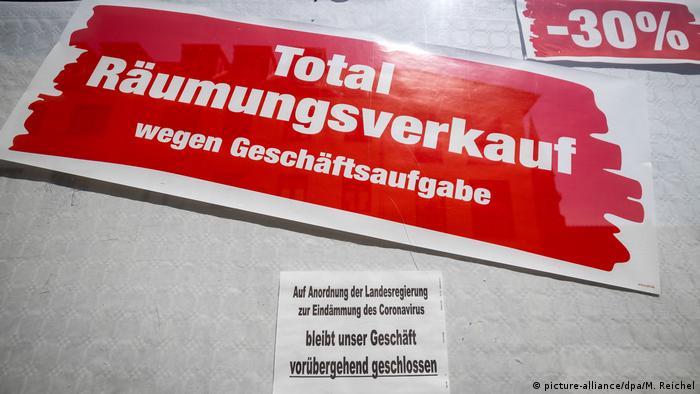 Germany's HDE retailers' association on Friday pleaded with customers to adhere more closely to coronavirus hygiene rules, saying that a renewed coronavirus lockdown in the event of a second wave could push many them out of business for good.

Sales for many non-food retailers in Germany had yet to return to pre-coronavirus levels, the German Trade Association (HDE) said in a statement published on its website.

While food and online trade have reported record growth in recent months, clothing retailers continue to struggle, the statement said, citing data from the country's federal statistics office and from an HDE trend survey.

"The situation is improving, but remains critical for many retailers," HDE managing director Stefan Genth said.

The HDE survey showed that while some two-thirds of the non-food retailers achieved at least 75% of the sales of the same week last year, 27% were still facing serious difficulties.

Most retail companies will not be able to recoup their sales losses over the next months, Genth said. Consequently, two-thirds of non-food retailers were expecting a drop in sales in the second half of the year, he added.

"There is no reason to sound the all-clear. Many businesses are still in great danger of insolvency. Now it is also important that the government aid gets to where it is needed quickly and without a lot of red tape," Genth said.

In a separate statement also published Friday, HDE President Josef Sanktjohanser called for greater adherence to coronavirus hygiene regulations in stores, saying that a second lockdown could be devastating to many retailers.

Such health rules for customers, like wearing masks in stores and keeping distance from other customers, had helped Germany to come through the coronavirus crisis thus far relatively unscathed, Sanktjohanser said.

"However, it fills me with great unease that many people are apparently no longer so strict about observing the rules and that the number of infected people is rising again," he said. "I therefore appeal to the sense of responsibility and discipline in all of us: we cannot be allowed to destroy what we have achieved."

Read more:Coronavirus: How Germany's economy would cope with a second wave

HDE forecasts predict that the coronavirus and the response to it will cause a loss of €40 billion ($47 billion) in sales for non-food retailers in Germany. Up to 50,000 retail jobs could be lost as a result.

"If the first wave of the pandemic already caused such dramatic consequences for the industry, I don't like to imagine a second one," the president said. "For many retailers, there would be no chance of escaping insolvency if restrictions were imposed again or if a second phase of lockdowns were to occur."