A German couple was among three people found dead in a glacial lake in Alaska. Local officials say chunks of ice falling from the Valdez Glacier may have knocked the tourists out of their boat and into the icy water. 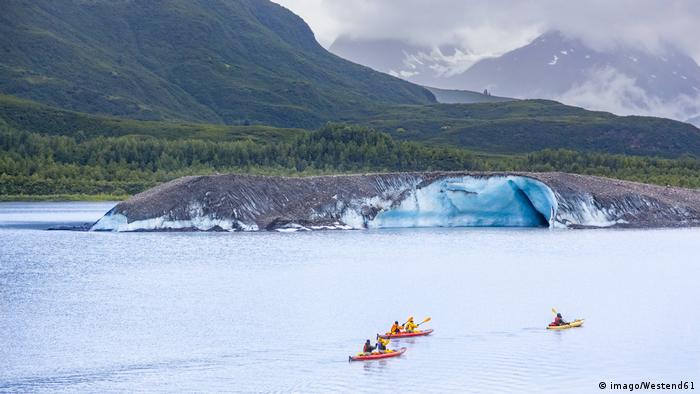 Police in the US state of Alaska said two German tourists and their guide were canoeing on Valdez Glacier Lake when they had an accident.

Their bodies were recovered on Tuesday after a kayaker raised the alarm.

The victims, all aged in their 60s, appeared to have been paddling in a single inflatable boat, officers in the port town of Valdez said.

One of the individuals was found on an ice floe, while two others were floating in the lake. Authorities are investigating their cause of death.

Valdez city spokeswoman Sheri Pierce said the glacier was shedding ice, and that falling chunks may have capsized the canoe.

"It's a very dangerous situation to be back towards the toe of a glacier when you have those types of unstable, large pieces of ice in the water," she said.

All three victims were wearing life jackets, but they did not have wetsuits to protect them from the freezing water.

"That water is glacier water, and it is so, so very cold," Pierce said.

Germany's Foreign Office has not confirmed the deaths, but it said the German consulate in San Francisco was in touch with local authorities.

The Valdez Glacier Lake, which lies about 193 kilometers (120 miles) east of Alaska's largest city, Anchorage, is known for its spectacular mountain views. The area is a popular tourist destination, offering an array of winter and summer outdoor activities such as kayaking, hiking and skiing.

Twenty people died and a dozen are missing after a boat carrying 60 wedding guests hit a cargo ship and sank off Myanmar. The cause of the accident is being investigated. (08.04.2017)

A 136-year-old wooden schooner had only just emerged from a €1.5-million renovation when it was sunk by a container ship near Hamburg. The accident would likely have been fatal if rescuers hadn't been in the area. (09.06.2019)