Metalworkers union IG Metall and western German steel industry employers have reached a wage agreement that could serve as pilot deal for the whole sector, and coming at a time of hope for the struggling industry. 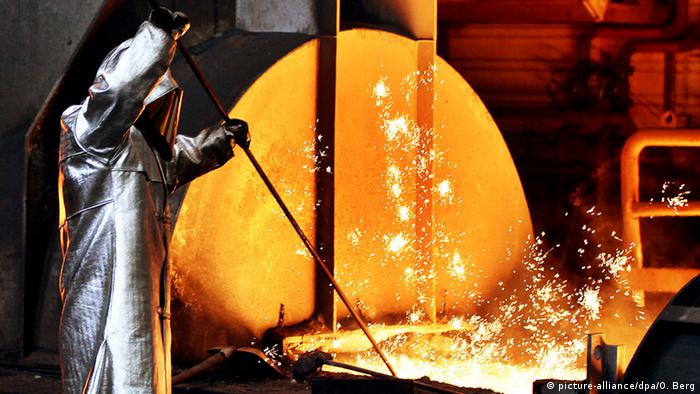 The wage agreement also includes a further wage hike of 1.7 percent from May next year, with the deal scheduled to run until the end of 2018. It is expected to serve as a pilot deal for the remaining 16,000 steelworkers in other German regions.

Germany's biggest steelmaker has reported a falling net profit for its fiscal year ended September, weighed down by massive overcapacity in the industry and cheap exports of subsidized Chinese steel. (24.11.2016)

A study commissioned by Greenpeace has found out that China massively expanded its steelmaking capacities last year, despite pledging to cut output amid a steel glut that has led to a global crisis in the industry. (13.02.2017)

Tens of thousands of German steelworkers have taken to the streets, demanding more action against the dumping of cheap Chinese imports and greater job protection amid uncertainty over the industry in Europe. (11.04.2016)

IG Metall chief negotiator Knut Giesler described the result as "acceptable," as it reflected the present situation in the industry and would give workers an increase in real wages.

Originally, the steelworkers wanted to get 4.5 percent more over the course of the next 12 months. But company representatives, including those from German steel behemoths ThyssenKrupp and Salzgitter AG, had offered only 1.3 percent, unleashing warning strikes across the sector.

Employers' representative Andreas Gross said the wage package presented "no reason to jubilate" for both sides. He cited an improving sector outlook, higher inflation and bigger pay deals in other sectors as reasons why the talks couldn't prevent the "additional burden" for companies.

Rising wages have played an increasing role for German growth in the past few years, boosting private consumption as an important pillar of economic activity.