A study commissioned by Greenpeace has found out that China massively expanded its steelmaking capacities last year, despite pledging to cut output amid a steel glut that has led to a global crisis in the industry. 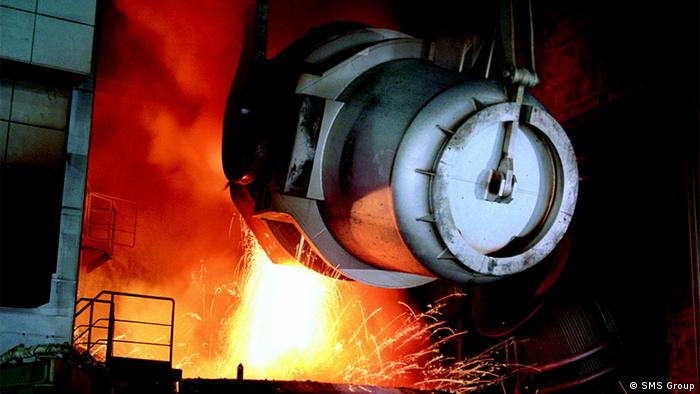 Eighty percent of this increase occurred in three provinces bordering Beijing, causing air pollution to spike in the capital at the end of the year and early 2017, the study carried out by steel consultancy Custeel added.

The report also acknowledged that the Asian powerhouse cut some of its overcapacity last year, but this was more than offset by the opening of new factories or restarting of idle plants.

Tens of thousands of German steelworkers have taken to the streets, demanding more action against the dumping of cheap Chinese imports and greater job protection amid uncertainty over the industry in Europe. (11.04.2016)

Steel workers and managers protested the import of Chinese 'dumping' products at a rally in Brussels. They urged the EU not to exacerbate the situation by granting China market economy status. (15.02.2016)

Germany's biggest steelmaker has reported a falling net profit for its fiscal year ended September, weighed down by massive overcapacity in the industry and cheap exports of subsidized Chinese steel. (24.11.2016)

China makes more than half the world's steel, but a slowdown in its economy and sagging global demand has left the industry with massive excess capacity. The country has been accused of dumping its production on world markets, depressing prices further and violating international trade agreements.

In 2016, Chinese authorities vowed to tackle the industry's glut problem and, indeed, cut 85 million tones of capacity. However, Greenpeace has now found out that 73 percent of it was already "idle, or non-operating," while only 23 million tones of cut capacity was operating.

The report also said that the increase in China's operating capacity correlated with a three-percent uptick in the country's steel output in the second half of last year.

"Global markets are awash with steel and the people of northern China continue to choke on the industry's major byproduct, smog. Increasing steel capacity makes neither economic nor environmental sense," said Myllyvirta.

The Greenpeace official called on China's Communist leaders   to revise its cut targets to ensure "genuine reductions in operating capacity." Cutting already idle capacity was not enough "to win the battle to tame the steel industry and the central government's much-touted ‘war on air pollution'," said Myllyvirta.

For the report, Custeel mapped changes in operating capacity in 2016 from government and company documents, and from industry surveys carried out by the consultancy.