Steel workers and managers protested the import of Chinese 'dumping' products at a rally in Brussels. They urged the EU not to exacerbate the situation by granting China market economy status. 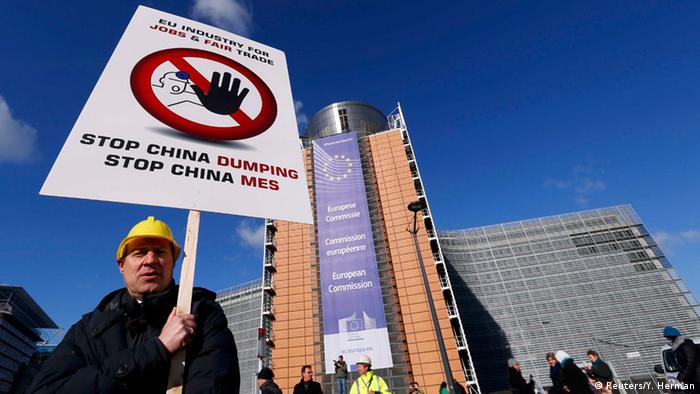 United in their frustration over Chinese products being sold below production cost on the European market, more than 5,000 workers and managers from the steel and other sectors from 17 European countries gathered in Brussels for a joint protest.

Ahead of the protests, Eurofer, Europe's main steel association, urged the EU Commission to do more to clamp down on cheap Chinese products flooding the European market, which has been grappling with low prices for raw materials and finished steel products.

Last week, the world's largest steelmaker, ArcelorMittal, reported a staggering net loss of of just under $8 billion (7.16 billion euros) for 2015, more than four times the previous year's net loss of $1.86 billion. German heavyweight ThyssenKrupp also slipped into the red in its first quarter of the year. 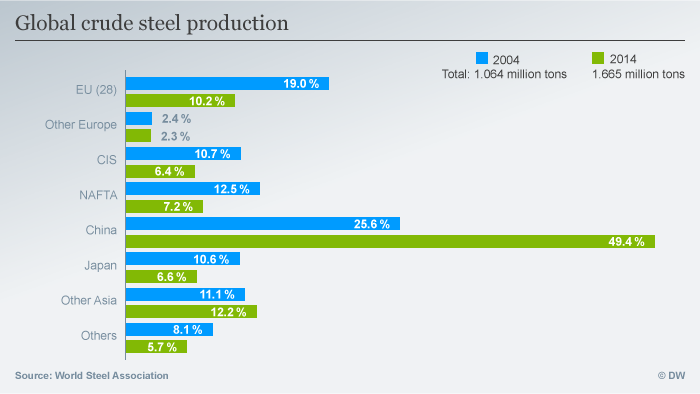 Last Friday, the European Commission launched probes into imports of Chinese steel and imposed import duties on cold-rolled flat steel from China and Russia, which it says were sold at below cost - what is known as "dumping." It means that of 37 so-called "trade defense measures" currently enforced by the EU, 16 involve Chinese products.

But steel bosses say that is not enough to save a vital industry in Europe. "Since the financial crisis, 85,000 jobs have been lost in the European steel industry, in the past six months alone, 7,000 more jobs have gone," Eurofer President Geert Van Poelvoorde said ahead of the protests.

Steel bosses are also lobbying against China being granted "market economy status" (MES), which they say would lead to even more job losses. Without MES, the WTO's 162 member countries have more leeway to slap anti-dumping measures on cheap Chinese products.

"Granting China MES is giving it an unlimited license to dump," Milan Nitzschke, spokesperson of Aegis, an alliance of around 30 European sectors from 17 countries, which helped organize Monday's protest, said in a statement released ahead of the demonstration.

The steel industry is a key industry in Europe, supplying and impacting on the continent's massive car sector as well as its engineering firms, telecoms companies and other manufacturers. Germany is the biggest steel producer in Europe.

Aegis's members argue that China is not a market economy and granting it MES would leave "Europe defenseless against a flood of Chinese imports that would wipe out European jobs," according to Nitzschke.

The EU is currently debating whether to treat China as a market economy from this December. Beijing insists the status is appropriate 15 years after it joined the World Trade Organization (WTO).

China said on February 4 that it would strive to reduce excess capacity in the steel sector by 150 million tons by closing old plants and not approving new steel mills. While not negligible, the figure is small given that China is believed to be sitting on an overproduction of 340 million tons.

On Sunday, the Chinese Trade Ministry published a statement on its website calling the "excess capacity in the steel sector a global challenge." China, it said "had already implemented a number of costly measures to reduce overcapacity, which are already bearing fruit."

The statement called for an "honest exchange" on fair market practices with WTO partners.

China is by far the world's biggest steel producer, so it is not surprising that it has the highest excess capacity, Emmanuele Norsa, managing editor for steel EMEA at Platt's, a provider of data and analysis on various commodities, told DW.

"Globally, the problem is overcapacity, rather than lower demand. And the main overcapacity is in China," he told DW. But he points out that "overcapacity in Europe is an issue as well, even though Europe has started the process of aligning its capacity a little bit earlier on than China."

In terms of demand, however, he says, "2015 was a relatively positive year for European steelmakers."

The car industry was a bright spot, for example, and given that 18 percent of Europe's demand for steel comes from the car industry, it is not to be sniffed at.

He also points out that China is not the only country affecting Europe's market share. "If you look at the volumes and the prices, China is not the only player putting pressure on Europe," Norsa says, adding that competition from Russia, Brazil and, in future, Iran should not be underestimated.

The duties imposed by the EU last week on Russia for example, Norsa says, were almost twice as high, showing that China is not the sole thorn in Europe's side, but no doubt the biggest.

The EU has until the end of the year to decide on whether to grant MES to China. The US and Canada are against granting China the status.

At a news briefing on Monday, European Commission spokesman Daniel Rosario insisted that the decision would be strictly based on technical considerations, not "philosophical" views. "This is a specific discussion in the very specific and strict framework of the anti-dumping legislation of the EU" he said.

The world's second-largest economy has logged its slowest growth in 25 years. But what does China's slowdown mean, and how does it affect other countries? Deutsche Welle answers some key questions. (19.01.2016)

France's Emmanual Macron and Turkey's Recep Tayyip Erdogan have been trading barbs over free speech and a French plan to fight radical Islam. The motivations for the fight are many, and the consequences could be great.