The world's second-largest economy has logged its slowest growth in 25 years. But what does China's slowdown mean, and how does it affect other countries? Deutsche Welle answers some key questions. 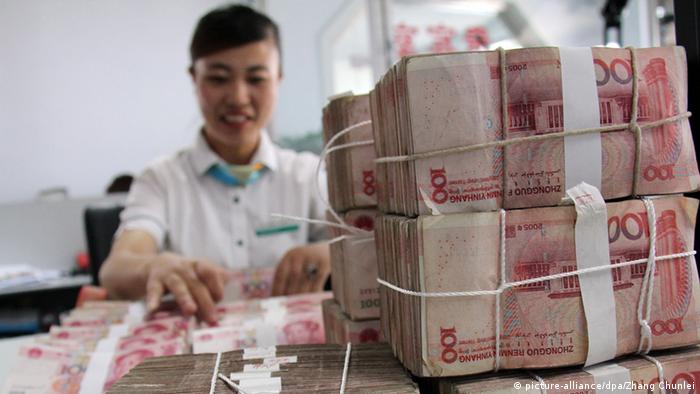 What do you mean "China's economy is slowing"?

China's economy is still growing, just at a slower pace. The last few decades were marked by rapid, often double-digit growth in the country's GDP and a lot of people figured that would go on forever. The country's appetite for resources - raw materials, energy, etc. - seemed insatiable. The government in Beijing was investing massively in infrastructure. Bridges, dams - you name it - were popping up left and right. Plus, Chinese factories were making goods and exporting them at a really fast clip. There's a reason consumers around the world can find "Made in China" labels everywhere they look. An overreliance on exports, however, can be unsustainable as it makes a country vulnerable to fluctuations in demand from abroad. Now Beijing wants to wean the economy off its traditional dependence on exports and extravagant infrastructure spending. For that reason, the slowdown is almost entirely a result of internal factors rather than external ones.

Why didn't anyone warn me about this?

As Mark Williams, the Chief Asia Economist at Capital Economics, notes: A lot of experts and observers had been warning for several years that a slowdown was coming, but their words fell on deaf ears. Even those people who foresaw it may have reckoned with it being more gradual. "The slowdown has probably come a little faster than most people expected," Williams says. Some experts also have doubts about the veracity of the official growth figures that come out of Beijing. Many analysts take the assurances of China's chief statistician that his office's economic data are "true and trustworthy" with a grain of salt. There is any number of things that could skew the numbers, from political pressure to the speed with which the figures are released. Capital Economics, for instance, estimates China's economy grew by around 4.5 percent in 2015 compared to the year before. On Tuesday, Beijing said it had grown by 6.9 percent - which was still the lowest level of growth in a quarter of a century.

Who cares? Why does China's economy matter to me?

A lot of that depends on where you are. If you live in China, the implications of a slowdown in economic activity are fairly obvious: Wages won't rise as quickly and many employees could lose their jobs. If you live in a major commodity-producing country - say, where oil comes from or where rare earths are mined - then a lot of the businesses around you may be in for a tough time as Chinese companies do less spending abroad. Most European countries and the United States shouldn't take a huge hit, at least not directly, because their economies weren't exporting much to China anyway. One notable exception is Germany, where bilateral trade ties amounted to more than 150 billion euros ($163 billion) in 2014, although even Europe's largest economy seems to be weathering China's economic slowdown rather well.

Does the Chinese government know what it's doing?

Doubts have definitely been raised about Beijing's ability to lay the groundwork for more sustainable economic growth, particularly after the stock market turmoil of recent weeks. After share prices tanked for the second time in a few days in early January, the director of the Mercator Institute for China Studies in Berlin, Sebastian Heilmann, said in a flash analysis: "The Chinese government's competence to manage the economy has taken a hard knock, notably also at home, because of the stock market crashes people have kept on seeing." Since last summer, Beijing has been trying to calm investors by injecting cash into the financial sector and preventing large shareholders from dumping their stock. But those measures have not had the desired effect.