Tens of thousands of German steelworkers have taken to the streets, demanding more action against the dumping of cheap Chinese imports and greater job protection amid uncertainty over the industry in Europe. 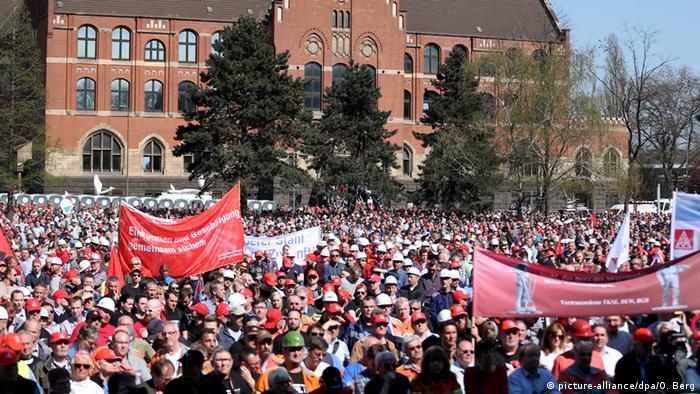 According to Germany's engineering union, IG Metall, about 45,000 workers took part in protests throughout Germany on Monday, demanding a "future for steel" in Europe.

The steel industry employs 87,000 people in Germany, which unlike many other EU countries still has a strong manufacturing base.

During the main rally in Duisburg, Günter Back - the head of steelmaker ThyssenKrupp's central works council - warned management to include workers in any consolidation plans or face mass walkouts.

"We are not prepared to be bystanders if you are in your back rooms making plans for us," he told a crowd of 17,000 steelworkers.

ThyssenKrupp workers fear they could face a similar fate to their peers in Britain, where Indian steel giant Tata has put its entire business up for sale, endangering thousands of jobs.

Most European steel companies, including top producer ArcelorMittal, have been hit by plunging prices due to overcapacity in China - the world's biggest steelmaker. ThyssenKrupp is said to weigh a merger with Tata Steel or another player.

In the protests on Monday, however, German steelworkers and managers were united in their demand to stop cheap steel imports from China.

But the sector is buckling under pressure from global overproduction amid an economic slowdown in emerging economies. Producers also accuse Chinese and Russian manufacturers of unfairly undercutting prices on world markets.

Moreover, they argue new climate-saving regulation planned in Brussels will make steel production uneconomical in Europe and provide more favorable trade terms for Chinese exports that are not subject to stiffer environmental laws.

Addressing the rally in Duisburg, German Economy Minister Sigmar Gabriel vowed to fight for the German steel industry in Brussels.

"We have nothing against China getting market economy status but only if it behaves like a market economy," he said, referring to the coveted World Trade Organization status that China is expected to attain in December, and which will make it much harder for Europe to impose anti-dumping duties on Chinese steel.

Under pressure from Britain, France and Germany, Brussels has already imposed import duties on some Chinese steel products and has started anti-dumping investigations. But steel producers said the measures were not enough.