German media has reported that the Bundeswehr will pay the national rail service Deutsche Bahn millions for the program. Both the army and the trains have been struggling with diminishing resources and reputations. 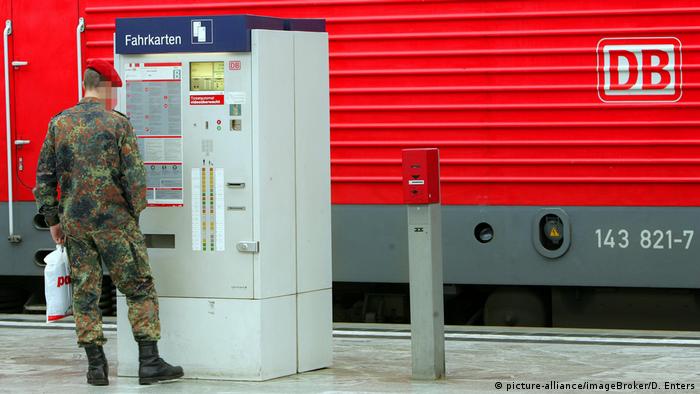 The deal struck between DB, the German armed forces (Bundeswehr), and the government comes as Germany struggles to fill the ranks of its army after conscription was abolished in 2011.

According to the Bild tabloid, Transport Minister Andreas Scheuer took part in the negotiations, as well as the chairman of DB's long-distance branch, Michael Peterson.

The German military will reportedly pay DB some €4 million ($4.4 million) a year to let all members of the armed forces enjoy free train travel.

The agreement comes at a time of struggle for both DB and the Bundeswehr. After decades of holding a monopoly over the country's rail lines, DB now finds itself competing with private train companies. Cheap long-distance bus services as well budget airlines also provide increased competition.

Due to their history, Germans have been extremely hesitant to embrace their armed services, and a military career can carry far less prestige in many swathes of German society than it may in other countries.

Until 2011, young German men were required to either do a year of military service or of civil service, which helped the Bundeswehr get the personnel it needed. However, since that obligation was dropped, new recruits have been hard to come by, leading to massive PR campaigns on social media as well as the opening of its first-ever recruitment offices last year.

The Bundeswehr has also had to deal with ever-increasing problems with faulty equipment.

The German government has also had several embarrassing incidents with faulty official aircraft. Chancellor Angela Merkel famously had to get a commercial flight to Buenos Aires to attend a G20 summit in 2018 after her plane malfunctioned between Berlin and Cologne.

External consultancy cost Germany’s Defense Ministry almost as much as all 13 other ministries put together in recent months. The opposition Left party says advisers treat the military as an "El Dorado." (08.08.2019)

The German government is to fund a massive 10-year modernization program, a newspaper has reported. The proposals could offer relief for commuters who have long complained about the tardiness of Deutsche Bahn trains. (24.03.2019)