Germany's head of state has called for more efforts to remember Nazi atrocities carried out in the former Soviet Union. Hundreds of thousands of people were killed during the occupation. 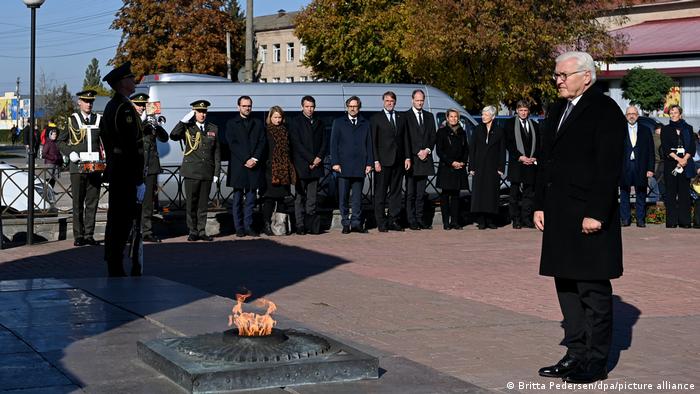 German President Frank-Walter Steinmeier visited the sites of atrocities committed by the Nazis in Ukraine during their occupation on Wednesday.

He started on Wednesday afternoon in the Ukrainian village of Koryukivka where, in March 1943, Nazi soldiers killed 6,700 people over two days in retaliation for an attack on a nearby German garrison.

He later went to the site of the Babyn Yar massacre where the Nazis killed over 33,000 Jewish residents in the city of Kyiv over two days in September 1941 — 80 years ago.

President Steinmeier, along with Israeli President Isaac Herzog and Ukrainian President Volodymyr Zelenskyy, were set to inaugurate a yet-to-be-completed memorial center dedicated to the stories of Eastern European Jews. 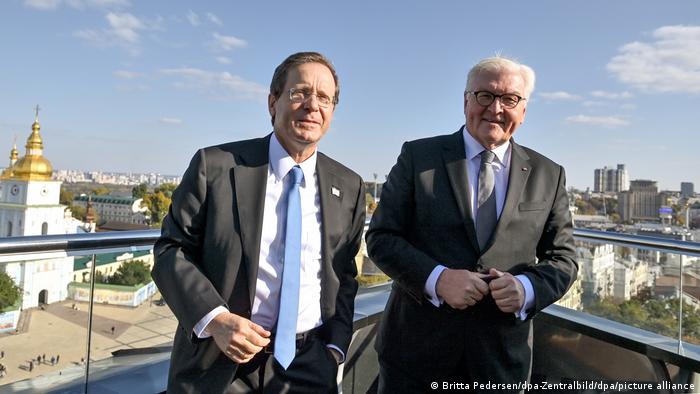 Describing the atrocity, Steinmeier said: "This act — it was not an act of reprisal. The mass murder of Kyiv’s Jews was a meticulously planned crime — planned and carried out by members of the SS, the security police and the Wehrmacht. All of them were involved."

"How I wish that I could state this as an unconditional truth. How I wish that I could say: We Germans have learned the lessons of history once and for all.," the president said. "But I cannot. It pains and angers me that antisemitism is, in Germany too — in Germany in particular — gaining strength once again. It pains and angers me that — in the throes of a pandemic in particular — old hatred is being reworked in new conspiracy theories, whipping up enmity, threats and violence," he added.

"For us Germans, there can only be one response: never again!"

A total of around 100,000 people, including Roma people, prisoners of war and partisans, had been murdered in Babyn Yar (also often spelled Babi Yar or Babin Yar in English) by the time the Soviet Red Army liberated the city from the Nazi occupation.

The Babyn Yar Holocaust Memorial Center celebrated the launch of the first phase of the project on their website.

"More than 80 years have passed since the first day of the mass shootings in Babyn Yar. However, the story of the 'Holocaust by Bullets' still remains untold and contains many white spots," it said.

"Since its creation, the Babyn Yar Holocaust Memorial Center has set itself the task of commemorating the victims of the Babyn Yar tragedy and contributing to the humanization of humanity by preserving and studying the history of the Holocaust."

"The organization aims to bring the Babyn Yar tragedy out of oblivion, as it has been in fact for 80 years, and to build a memorial complex of international level in the territory of the ravine, to honor the memory of all the victims of Babyn Yar and the Holocaust."

Steinmeier: We must do more to remember

His first stop on his visit was a memorial for those who were killed by the Nazis in the village of Koryukivka.

The president called for more to efforts to be made to commemorate the victims of national socialism throughout the former Soviet Union.

"The sites of National Socialist crimes in Ukraine are barely marked on the map of our memories," he said. "And that is why we need to illuminate the blind spots in our memory. We must make common cause with Ukrainians in sharpening our memory."