Police in northern Germany realized a MP5 submachine gun went missing in March, but waited months to report the case. The gun and ammunition have yet to be found, with pressure mounting on officials over their response. 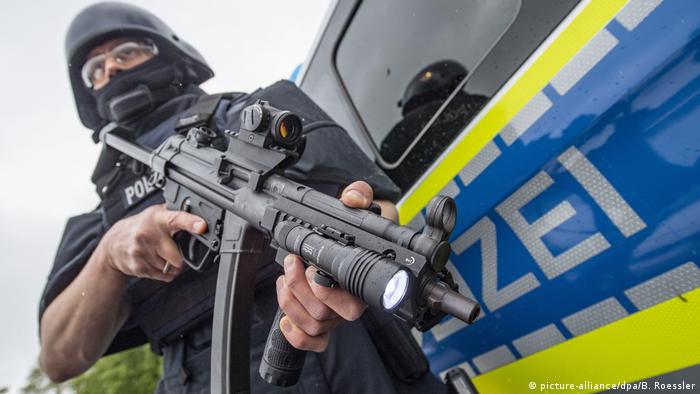 Police and politicians in the northern German state of Lower Saxony faced criticism on Friday after it was revealed that police in the town of Celle lost one of their submachine guns.

Authorities first realized in March that the Heckler & Koch MP5 submachine gun and two magazines of ammunition had gone missing. Log books show the gun was last officially logged out during a shooting exercise in November.

Celle police, however, did not immediately report the missing weapon — waiting until June to inform state officials.

"The incident is unacceptable," Pistorius said during an internal affairs committee meeting.

Despite an intense, state-wide search for the missing weapon and ammunition over the past few months, the gun has not yet been found, state police chief Axel Brockmann said.

Unlike service pistols that are permanently assigned to individual officers, the submachine gun is a so-called "pool weapon" only carried in certain situations, according to local public broadcaster NDR.

Those types of weapons are used by multiple officers who are supposed to register that they've received the gun and sign off when they return it.

This appeared to not be the case in Celle, where a row of disciplinary actions have been taken within the police department, Brockmann said. A criminal investigation has also been launched.

The police chief noted that there were "shortcomings" in the way that officers adhered to the rules, procedures and inventory checks to ensure the weapons are logged in and out.

Pistorius and other Lower Saxony officials have come under pressure for their reaction to the scandal, which was criticized by the opposition business-friendly Free Democrats (FDP) and Greens for being too slow and not transparent.

Stefan Birkner, the head of the FDP in Lower Saxony's state parliament, called the incident "horrifying."

"This is a warning signal that something is wrong with the procedures," Birkner said.

The left-leaning taz newspaper took a more wry approach to the news, posting a missing flyer for the gun, describing it as "black, lightly used, caliber 9mm."

"Caution: Do not use! Risk of death!" the flyer adds.

Pistorius' leadership of the ministry has come under fire recently over a row of scandals involving missing police and intelligence documents.

A few weeks ago, a case file with sensitive documents was stolen out of a police officer's car. The documents were later found when a fisherman retrieved them from a pond.Each evening at 1830 UTC, DW's editors send out a selection of the day's hard news and quality feature journalism. You can sign up to receive it directly here.

2018 saw a jump in the number of Germans applying for a basic weapons license. Police say the trend comes from a growing sense of insecurity, but warn increasing numbers of armed citizens may worsen the situation. (15.01.2019)

In Germany, states roll out stun guns despite risks

Police officers in Germany are being equipped with Tasers. But for people with prior heart conditions, their use can be dangerous — and even deadly. DW investigates. (03.08.2019)