Police have detained six men in Berlin who reportedly have links to the 2016 Berlin Christmas market attack. The lead suspect was planning to attack spectators at the race with knives, according to a newspaper report. 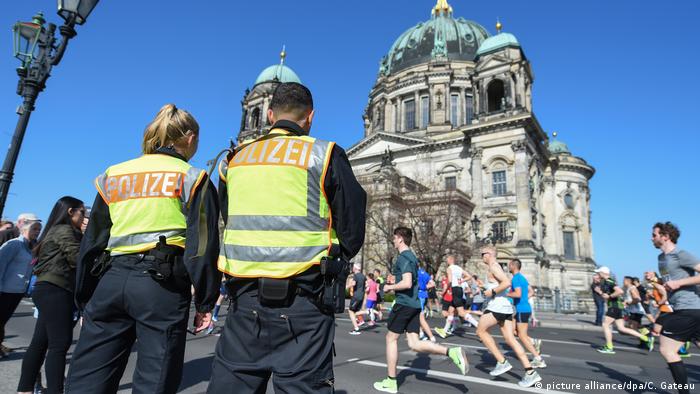 Police have arrested six people suspected of planning a "crime" during the Berlin Half Marathon on Sunday.

"There were separate indications that those arrested, aged between 18 and 21 years, were participating in the preparation of a crime in connection with this event," prosecutors and police wrote in a joint
statement. Berlin police wrote separately on Twitter that six people had been arrested.

German daily newspaper Die Welt had reported earlier that one of the men was planning a knife attack on spectators at the half-marathon. Officers had reportedly found two sharpened knives during a raid on the man's apartment in the west of the city.

"Thank you to the security personnel and Berlin police," wrote Michael Müller. "Your operation ensured that the half-marathon could take place without any incidents and be celebrated as a peaceful sporting event."

According to Die Welt, the lead suspect who had planned the knife attack reportedly knew Anis Amri, a Tunisian who killed 12 people and injured several dozen more when he drove a truck into a Berlin Christmas market in December 2016.

The suspect reportedly wanted to take revenge for Amri's death. Italian police shot and killed the 24-year-old Amri — who had pledged allegiance to the "Islamic State" terrorist group — while he was on the run in Milan.

The lead suspect arrested on Sunday was not however a "concrete threat" as security services had been observing him for some time.

The other three suspects also had links to Amri, according to Die Welt.

Read more: Christmas market terrorist Anis Amri may have been used as 'lure'

This year's half-marathon attracted more than 30,000 participants, according to organizer SCC Events.

An SCC spokesperson told dpa news agency that "everything had gone smoothly" during the race.

Berlin authorities had stepped up security for the event following a van attack in the western German city of Münster on Saturday that left two bystanders dead.