Germany's federal police force has said 71 of its officers were injured last year while carrying out deportations, according to a media report. The injuries, for the most part, were not severe. 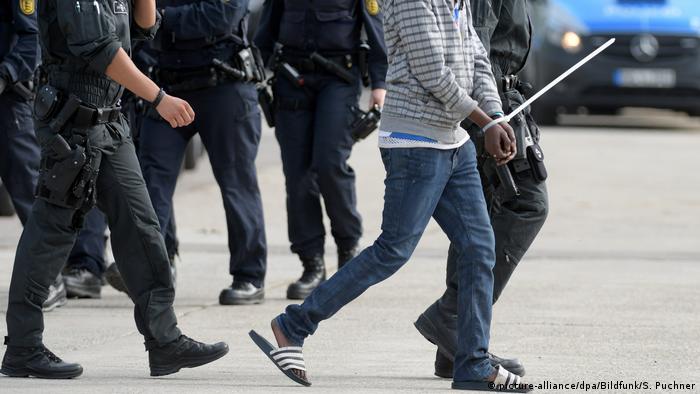 Germany's federal police have said that "of the 284 officers attacked during repatriations, 71 were injured" in 2018, according to a report Sunday in the Welt am Sonntag newspaper.

The figures only pertain to incidents related to deportation flights, for which the federal police are responsible. Germany's state-level police handle transportation to the airport for people slated to be deported.

There were 274 recorded instances of officers being attacked in 2017.

Ernst Walter, union leader for the federal police, told the Welt am Sonntag that officers endured "kicks, hits and head-butts during deportations." He added that the injuries were usually not severe, because the officers were specially trained to deal with such situations.

The exact "type or severity of the injury" was not recorded.

There is one known recent case of an officer in Munich falling and breaking his kneecap when a 26-year-old man from Sierra Leone slated for deportation panicked while on a set of plane stairs.

According to Federal Interior Ministry figures for last year, 23,617 rejected asylum-seekers were deported in 2018, less than the two years prior.

Roughly 31,000 deportations in that same period failed for various reasons, often because of missing travel documents. A total of 1,637 deportations had to be called off due to "acts of resistance" at airports.

Germany's Central Register of Foreigners registered 1.8 million people seeking protection in 2018. Most of those who had protection status came from Syria, Iraq and Afghanistan. (18.07.2019)

At a small church in The Hague, thousands of worshippers have been praying nonstop for nearly two months in an effort to protect Armenian asylum-seekers from deportation. But the government refuses to budge. (18.12.2018)