German police are investigating a group of soccer fans who celebrated their team's promotion by marching through the city of Cottbus in Ku Klux Klan hoods. Energie Cottbus has condemned the behavior as "inhumane." 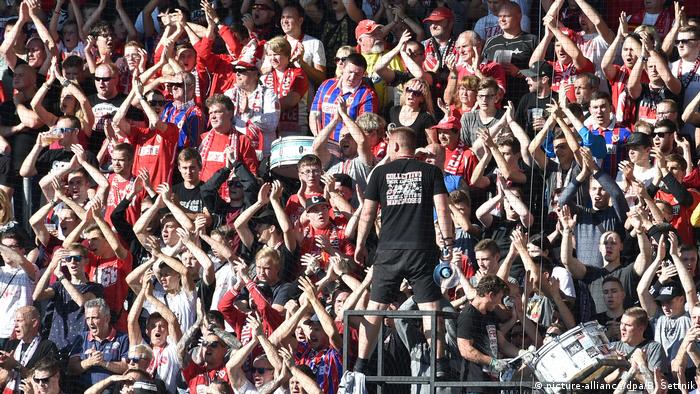 German soccer club FC Energie Cottbus condemned the actions of a set of its supporters on Monday after a photograph showing fans in Ku Klux Klan-style hoods made the rounds online.

The image shows five or six supporters wearing white hoods over their faces and holding a banner that reads "the rise of the evil" written in a Gothic script.

The group reportedly marched through the eastern German city as part of the celebrations marking Energie Cottbus' promotion to the third tier of the Bundesliga. The club won promotion following Sunday's 0-0 draw with SC Weiche Flensburg.

In a statement, the club decried the fans' behavior as "inhumane, repugnant and in no way tolerable," adding that they faced life-long bans if identified.

"We are deeply saddened by the fact that a few people, through their actions, spoiled the joy of victory and damaged the image of tens of thousands of Energie fans and the club," the statement said.

Police said they were investigating the incident, but declined to give further details. It still remained unclear who had taken the photograph.

The use of extreme right-wing imagery has become particularly sensitive in the city of 100,000, located just on the Polish border. Tensions between migrants and supporters of the far-right escalated earlier in January after Syrian teenagers carried out a series of knife attacks, one on a German teen and another on an 18-year-old woman. Hours later, five German men attacked two men "of foreign appearance."

The wave of violence prompted Brandenburg's Interior Minister Karl-Heinz Schröter to postpone the intake of refugees to Cottbus until further notice.

The photograph wasn't the only incident to prompt outrage in Cottbus on Sunday.

Energie Cottbus' manager Claus-Dieter Wollitz was forced to apologize on Monday after he and his team sung  anti-gypsy chants as they celebrated their promotion.

"I want to apologize publicly for this faux pas," Wollitz told local media. "We did not want to insult or discriminate against anyone."

The Jewish Forum for Democracy and Against Antisemitism, a German anti-Seminitism watchdog, posted a video on Twitter showing Cottbus players chanting "Trainer, you gypsy."

Wollitz then reportedly responded during a press conference later, in which he also described his team "gypsies."
Each evening at 1830 UTC, DW's editors send out a selection of the day's hard news and quality feature journalism. You can sign up to receive it directly here.

Berlin admitted shortcoming in its efforts against racism, xenophobia, and discrimination during a UN human rights review. While many UN members raised issues with Germany, others praised it for taking in refugees. (08.05.2018)

The 15-year-old girl tried to stop her classmates from making anti-Semitic jokes and displaying Nazi symbols. The Dresden student was awarded for her courage in reporting her classmates to the police. (08.11.2017)