Eastern German soccer clubs struggle to stay in the game

There's no lack of soccer talent in the east of Germany - but the money isn't there to support it. This season not a single eastern German team is in the top flight, the Bundesliga. 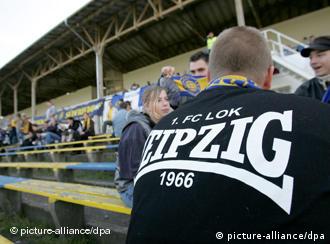 Lokomotive Leipzig a respected team? Sure, back in the 1970s

Managers of eastern German football clubs may be forgiven for hankering after the good old days. Under the communist East German government they didn't have to spend their time chasing sponsors, dealing with tax returns or worrying about revenue. Most importantly, though, East German clubs were real contenders back in the day. FC Magdeburg won the European Cup Winners' Cup in 1974. That same year, the East German team defeated West Germany during the FIFA World Cup. Clubs like Dynamo Dresden or 1. FC Lokomotive Leipzig were playing at the top of their game.

Twenty years after unification, these same clubs are now languishing in the lower divisions of the league tables. They're lucky to attract a crowd of a thousand to watch them play, and with every annual review they fear for their licenses. Not a single club from the east is in Germany's top division. 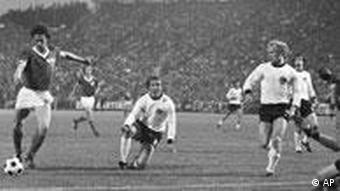 There won't even be any Bundesliga games in reunified Berlin this season - after 13 years, Hertha BSC, in the old days a West German team, was relegated back in May, following a dismal campaign.

Three eastern German clubs will be playing alongside Hertha in the second division, and there are another five in the third. Hans-Georg Moldenhauer, president of the North-Eastern German Football Association (NOFV) admits that "the current situation of professional football in eastern Germany is far from satisfactory."

So how did it come to this sad state of affairs? Wherever you go, the answer is the same: not enough sponsors, not enough money, and a history of poor management.

The amalgamation of East and West German soccer into one unified German competitive group in 1991 was too much of a challenge for the East German clubs; they simply weren't able to make the leap from socialism to capitalism in the space of just a few months.

"All of a sudden we got no state subsidies any more, and we had no idea how to run a market-based operation," said Detlef Krauspe, the former boss of Sachsen Leipzig. The best players, like Andreas Thom, Ulf Kirsten, and later Michael Ballack, moved to the rich clubs in the West. The former East had no private companies that could have invested money in the teams.

There are some such companies today, but most of them are only small or medium-sized businesses with very little money for sports sponsorship.

"The eastern German clubs have lots of small sponsors that don't provide that much in the way of finance, and don't offer long-term partnerships," says NOFV president Moldenhauer. 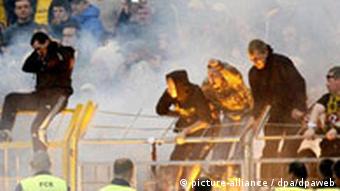 The clubs are therefore hardly ever in a position to make major investments. In order to attract big companies as sponsorship partners - like the deal Bayern Munich has secured with Deutsche Telekom - the eastern German clubs would have to be much more successful than they are at present. They would also have to acquire a more positive image.

The image of eastern German soccer has suffered badly in recent years. Media reports have focused not on victories but increasingly on hooliganism, riots and racist attacks, both inside and outside the stadiums.

Georg Moldenhauer says it's unfair. "This isn't an eastern German problem, and it's not football's problem either - it's a problem for all of society," he says. The media generally find stories like these more interesting than devoting themselves to the analysis of fourth-division games.

RB Leipzig as a model

Now, though, eastern German football has a new story to tempt the sports reporters: RB Leipzig.

In 2009 Austrian drinks manufacturer Red Bull acquired a license from the club SSV Markranstaedt in Saxony to compete in German football. A new club, RB Leipzig, was founded, replacing SSV in the fifth-division NOFV-Oberliga Sued. Players were bought for the team, as was the license for Leipzig Central Stadium, subsequently renamed the Red Bull Arena. At the end of its first season RB Leipzig finished league champion and was immediately promoted to the Regionalliga.

The new management's goal is for the team to play in the Bundesliga within 10 years. Since the start of the 2010 season, the Red Bull Arena, the biggest stadium in the territory of the eastern states, has been RB Leipzig's home ground. 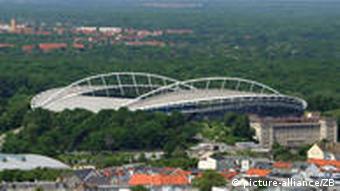 But the project is far from popular among football fans in Leipzig. There have been huge protests and a lot of hostility from supporters of FC Sachsen Leipzig and 1. FC Lokomotive Leipzig. They're worried about a decline in traditional fan culture and the commercialization of soccer in the region.

By contrast, though, a large part of the local population approves of Red Bull's investment. NOFV President Moldenhauer is also happy about it.

"In the past two decades we've always criticized the fact that the big sponsors just aren't out there," he says. "So I'm pleased that now, for the first time, we have a model for this kind of partnership here in eastern Germany."

Moldenhauer believes that what is almost more important is the signal it sends out to regional football: "We badly need clubs here to act as beacons," he says: to set high standards once again, and have a positive effect on eastern German football.

However, Moldenhauer admits that the RB Leipzig model is an exception rather than a panacea: "The clubs here must keep working on what they already have going for them, which is the fantastic work they do with young players."

In the past, eastern clubs were more or less forced to develop young local talent because they couldn't afford to buy in players from elsewhere. In addition to the work done by the clubs, the controversial East German sports schools (KJS) have now been transformed into modern football academies, and talented local children have profited from them.

The German Football Association has also invested - albeit not yet enough - in eastern German football: eight of its 36 elite sports schools are now located in the east. 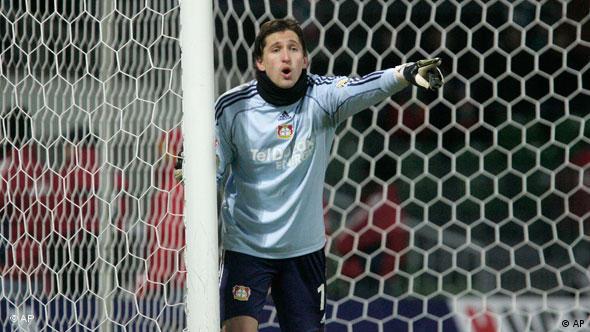 Adler left his home team Leipzig to play for Leverkusen

But what happens if a club can't persuade its own up-and-coming footballers to stay, simply because it isn't able to offer them much of a future? German national team goalkeeper Rene Adler plays not for his home club, VfB Leipzig, but for Bayer Leverkusen - even though he's often talks about how much Leipzig means to him.

Georg Moldenhauer doesn't think this will stop the eastern clubs from rising to the top of the tree once more. "Even if two out of every 10 good players move on, we'll still have a good quota," he says. He points out that this problem doesn't just affect eastern Germany. All over the world top players are keen to move to the top clubs. Moldenhauer cites the example of Sami Khedira: he didn't stay in Stuttgart, but allowed himself to be seduced away by Real Madrid.

The NOFV president believes that, in recent years, most clubs have improved their structures and have caught up with their western counterparts, particularly where management is concerned. The lack of big sponsors and the money they bring remains a problem, but there's not much the clubs can do about that. In spite of their economic woes, some have been developing very positively for quite a while now - and they are not just the usual suspects.

Ugly scenes of outraged Hertha Berlin fans invading the pitch once again highlighted the issue of maintaining order in stadiums. Across town, FC Union is taking a gentle approach to fans prone to blowing a fuse. (15.03.2010)

FC Union Berlin, a soccer club in the second division of the German Bundesliga, has dumped its main sponsor over allegations of ties to the Stasi, the feared secret police in the former East Germany. (25.08.2009)

The founder of the energy drink Red Bull is sponsoring an eastern German soccer club. The Austrian billionaire's new fifth league team is named Rasenballsport (RB) Leipzig, and he wants it in the Bundesliga. (06.07.2009)