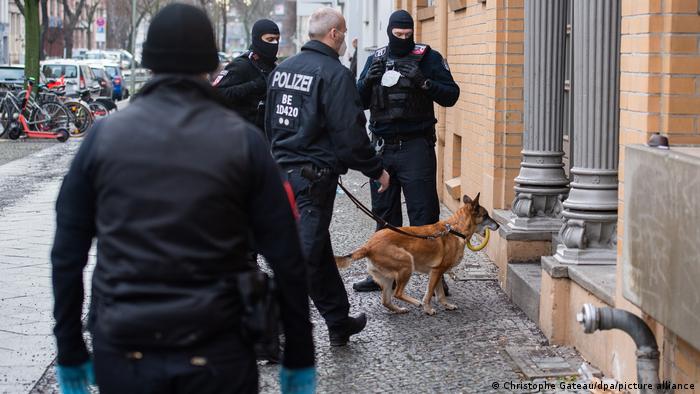 Police carried out raids in Lower Saxony, similar to this one that took place recently in Berlin

Police arrested 20 suspects as part of a sweeping crackdown on an organized drug-smuggling network in Germany on Wednesday.

Investigators accused them of being involved in importing large amounts of cannabis from southern Europe to sell in Germany, police in the northwestern state of Lower Saxony said.

The suspects are also thought to have trafficked cocaine from South America to a "considerable extent," the police said.

In addition, the perpetrators allegedly dealt in firearms, the Hannover Interior Ministry reported.

The network's alleged activities date back to 2017.

How police caught up with the smugglers

According to German tabloid newspaper Bild, the investigation was initiated by the Federal Criminal Police Office.

Investigations in France were crucial. Specialists in the country analyzed messages sent through the now-defunct encrypted messaging service EncroChat.

In many cases, chat pseudonyms were traced to several suspects in Hannover, the capital of Lower Saxony.

Raids leading to arrests were carried out in Hannover and around the town of Celle, in the same state, according to a police statement.

Raids also went ahead in the city of Halle in the neighboring state of Saxony-Anhalt, the major port city of Hamburg as well as in Baltic country Latvia.

Around 1,000 officials took part in the operation. In addition to detaining suspects, they searched around 65 premises.

"This is a real success in the fight against organized drug crime," Bild quoted Lower Saxony's interior minister, Boris Pistorius, as saying.

In late February, investigators in Germany and Belgium uncovered a total of 23 metric tons (25 US tons) of cocaine with a street value of billions of euros in a cross-European drugs bust.

It was the biggest ever, single haul for EU authorities.

In total, 102 metric tons of cocaine headed for the European continent were intercepted last year by an international law enforcement project co-implemented by the UN.