The NetzDG law has been in force since the New Year and has already sparked multiple controversies. Opposition parties across the political spectrum including the Free Democrats, Greens and Left say its time for change. Beer said Germany needed a law similar to the one the FDP proposed before Christmas that would give an "appropriately endowed authority" the right to enforce the rule of law online rather than give private companies the right to determine the illegality of flagged content. 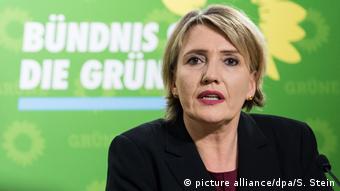 Simone Peter also called for the controversial law to be replaced

Speaking to Die Welt am Sonntag, Green Party Chairwoman Simone Peter also called for a replacement law that would take away the right of private companies to make decisions regarding flagged content.

"It is not acceptable for US companies such as Twitter to influence freedom of expression or press freedoms in Germany," Peter said. "Last year, we proposed a clear legal alternative that would hold platforms such as Twitter accountable without making them judges."

Greens' internet policy spokesman, Konstantin von Notz, also criticized the current statute, telling the newspaper that the reform of the law was overdue. ...as does the Left party

The parliamentary leader of the socialist Left party, Sahra Wagenknecht, told the Funke group of newspapers her party also supported moves to get rid of the law.

"The law is a slap in the face of all democratic principles because, in a constitutional state, courts rather than private companies make decisions about what is lawful and what is not," Wagenknecht said.

January 1 marked the start of a new "network enforcement law" (NetzDG) that forces internet platforms with more than 2 million users to delete illegal content in Germany within 24 hours of receiving a complaint. Failure to respond in time risks fines up to €50 million ($60 million).

Von Storch responded to an Arabic-language Twitter post by Cologne police on New Year's Eve by writing: "What the hell is happening in this country? Why is an official police site tweeting in Arabic? Do you think it is to appease the barbaric, gang-raping hordes of Muslim men?"

Cologne was the scene two years ago of mass sexual assaults on New Year's Eve. Most of the suspects were described as young men of North African and Arab origin.

Twitter informed von Storch that she had violated hate speech laws and temporarily suspended her account. The move led senior AfD politicians and the Federal Association of German Newspaper Publishers (BDZV) to complain that the NetzDG law had allowed Twitter to censor legitimate political opinions. 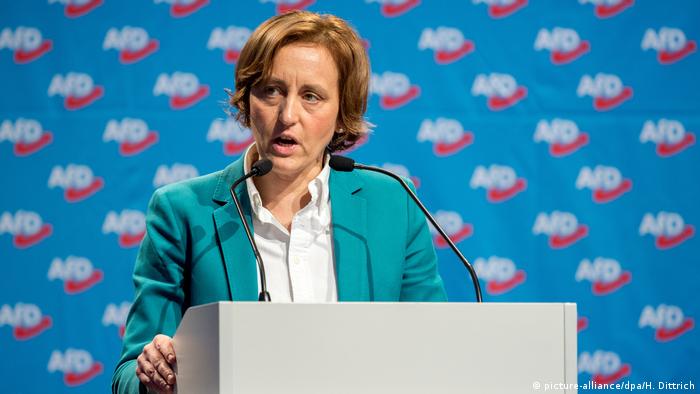 The controversy intensified after Twitter suspended the account of German satirical magazine Titanic for publishing a series of posts by an imagined von Storch, including some that attempted to poke fun at her posts concerning Muslim men.

The magazine's editor, Tim Wolff, said Titanic would defend itself from further suspensions and that Germany's NetzDG risked undermining satire.

The architect of the NetzDG law, Justice Minister Heiko Maas, a member of the Social Democrats (SPD) said in an interview with German daily Bild that the law was necessary because "social networks must adhere to our laws like everyone else," adding: "Freedom of expression is not a free pass for committing criminal offenses."

The head of the SPD parliamentary party, Andrea Nahles, also defended the law in in an interview with weekly Bild am Sonntag, saying it needed to be implemented.

"We need to ensure more responsibility in the internet — it is not outside of the law," she said. This [law] has nothing to do with censorship."

Germany's Angela Merkel has said she is optimistic about forging a deal with the Social Democrats to form a new "grand coalition" government. However, all leaders agreed that the new era requires a new political style. (08.01.2018)