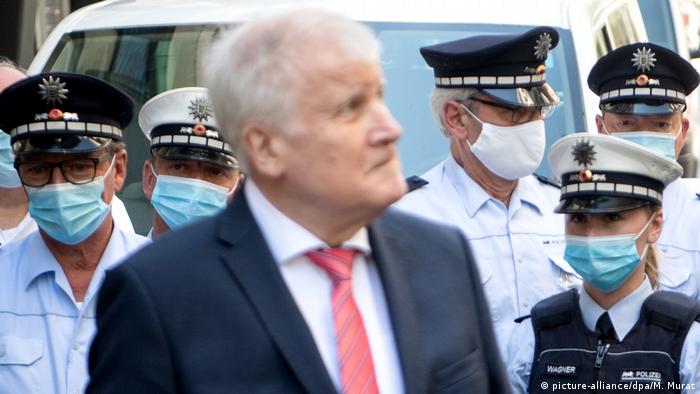 Germany's conservative Interior Minister Horst Seehofer has once again drawn the anger of anti-racism campaigners by rejecting calls for a study into racism in the German police.

"There won't be a study that deals exclusively with the police and the accusation of structural racism in the police," Seehofer said in an interview with the Bild am Sonntag newspaper.

"That wouldn't even begin to do justice to the problem. What is needed is a significantly wider approach for the whole of society, and that's what we're working on."

The interview did not include details of the study being proposed, though another study on racism and extremism in Germany's security forces is due to be released at the end of September by the domestic intelligence agency, the Office for the Protection of the Constitution.

Seehofer made a similar declaration in July during a wave of anti-racism protests that were staged throughout Germany after the police killing of George Floyd in the US.

The Justice and Interior Ministries had initially planned a study into racial profiling by police, only for Seehofer to veto the plan. Some state governments have pledged to go ahead with their own studies.

The German police has continually faced accusations of racism, politically over disproportionate spot checks of people of color.

There have also been a series of revelations about online chat groups among police officers that shared far-right content.

Earlier this week, 29 officers were suspended in the western state of North Rhine-Westphalia for sharing far-right images on WhatsApp.

At least 5 private WhatsApp chat groups were discovered, containing 126 electronic images, including photos of Adolf Hitler and a fictional depiction of a refugee in a gas chamber.

Seehofer called the revelations a "punch in the gut" but insisted that the overwhelming majority of German police officers believed in the principles of the German constitution.

Saskia Esken, leader of the center-left Social Democrats (SPD), currently in coalition with Seehofer's Christian Social Union (CSU), criticized what she called the minister's "ostrich method," which "damaged the image of the police."

There have also been raids against networks of "preppers" in the northeastern state of Mecklenburg Western-Pomerania that included police officers who hoarded guns and ammunition.

Opinion: White men need to open their eyes to racism

The debate about racism in the German police goes on. Interior Minister Horst Seehofer has refused to approve a study on it and sees the police mainly as victims. This is a cynical denial of reality, says Mirjam Gehrke.