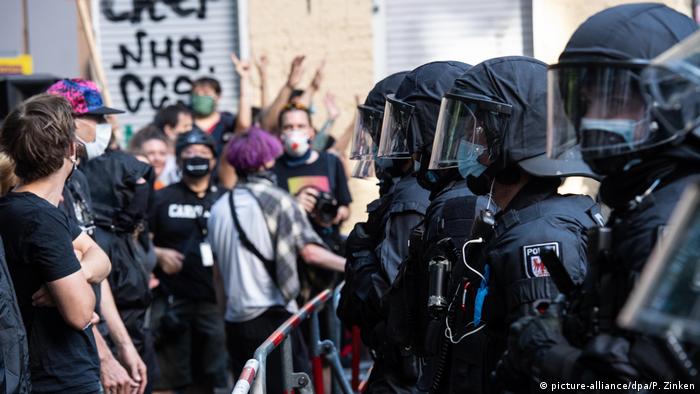 The Grüne Jugend wants to "gradually eliminate state force as a means to resolve conflicts and replace it with prevention and cooperation," according to a policy paper seen by the taz newspaper.

The organization's aim, the paper said, was to create a "liberated society that slowly overcomes violence and repression as a means to solve social problems."

Like police-defunding campaigns in the US, the Grüne Jugend argue that many of the tasks currently being carried out by the police could be performed much better by other state representatives, such as social workers or care workers with psychiatric training.

As examples, the paper named dealing with victims of domestic or sexual abuse, homeless people, refugees, or drug addicts.

The paper also calls for disarming many police operations, not allowing officers to carry pepper spray as standard, and banning the use of dogs and horses to manage demonstrations.

Other demands include the nationwide introduction of theanti-discrimination law that Berlin passed earlier this year, which specifically bars the police from discriminating according to skin color, gender, religion or mental or physical disability.

The Grüne Jugend paper occasionally uses provocative language, describing some police officers as "perpetrators in uniform" and arguing there was a "structural problem" in the force.

It added that there were "thousands of cases of police brutality a year that no one is called to account for."

The German police has been dogged by accusations of unnecessary violence,right-wing culture in the ranks, and deliberate racial profiling. Interior Minister Horst Seehofer has refused to green-light a study into racial profiling in the police.

Grüne Jugend spokesman Georg Kurz called the plans "first steps towards binding the police to principles of the rule of law."

"It is a disaster for democracy if it can be ascertained that unlawful police violence remains without consequences in most cases," he said.

The Green party itself has yet to comment directly on the paper. "We are constantly exchanging ideas with Grüne Jugend, but it is an independent organization with its own leadership and its own ideas," spokeswoman Nicola Kabel told the taz.

Irene Mihalic, domestic policy spokeswoman for the Green party in the parliament, and herself a police officer, said the paper contained, "a lot of interesting impulses," but that she did not like the "tone and the often polemical evaluations." "Most police officers do a very good job and have nothing to do with racism," she told the taz.