Under a proposed law, Germany's Federal Office for Migration and Refugees (BAMF) would be allowed to examine refugees' mobiles to establish their identity. The bill aims to prevent refugees from giving false identities. 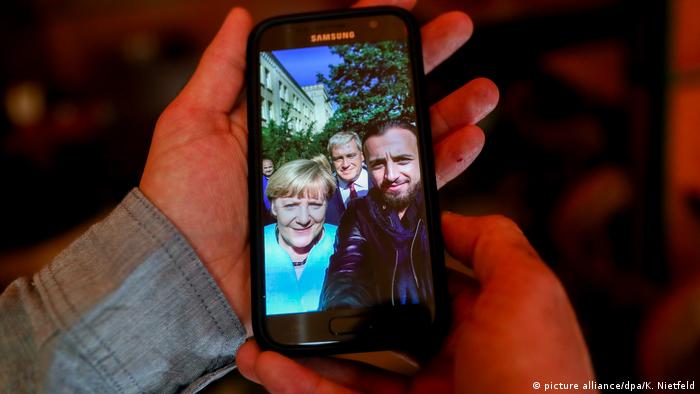 According to information published by three German media outlets on Sunday, new draft legislation could see German authorities circumventing the consent of refugees and checking their cellphones in order to establish their identity.

Regional German broadcasters WDR and NDR, and the Munich-based daily "Süddeutsche Zeitung" reported that the proposed law seeks to "improve the enforcement of the obligation to leave the country."

Germany's Interior Ministry has declined to disclose any further details until a final decision has be made on what should be included in the bill - or even if it will be submitted to parliament.

In principle, access to mobile phones and other data carriers has been permissible since an amendment of the 2015 residence law. However, the Federal Office for Migration and Refugees (BAMF) currently needs the consent of asylum seekers, without which authorities are only able to see the contents of a phone with a court order - which is only granted if there is a suspicion of a criminal offense.

Taking figures from 2016, some 50 percent to 60 percent of asylum-seekers applying for refuge in Germany would have been affected had the bill been in effect.

The proposed law is just the latest in a string of several proposals to come out of Berlin that aim to prevent refugees from giving different or false identifications to authorities.

BAMF, which is currently dealing with a backlog of some 430,000 unprocessed asylum applications,  last week called for all refugees currently living in Germany to be fingerprinted in order to cut down on false identities.

In some case, asylum-seekers lie about their identity out of fear of imminent deportation. Others, however, had lied in order to carry out benefit fraud.

Earlier this month, a 25-year-old asylum-seeker in Hannover was handed a 21-month suspended sentence including 200 hours of community service for fraud, after admitting to having registered in several cities across Germany under seven different names in order to obtain social benefits.

Tunisian-born Anis Amri, who killed 12 people in a terror attack at a Berlin Christmas market in December, also reportedly hid behind 14 different identities. Though the multiple identities did not prevent security services from following him for weeks ahead of the attack, or holding him in a deportation cell for the maximum period of time without charge while waiting for Tunisian authorities to acknowledge his citizenship.

The goal of integration is creating equal opportunity, not a homogenous cultural identity, Manfred Schmidt, president of the Federal Office for Migration and Refugees, told Deutsche Welle in an interview. (26.10.2011)

German cabinet ministers have backed a proposal to introduce a new type of identification for all refugees in the country. The proposed bill also envisions a central database to store information on the newcomers. (09.12.2015)