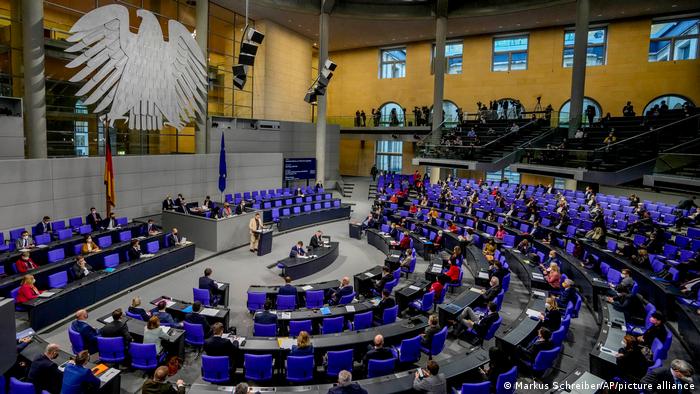 Germany's Bundestag rejected a proposal to impose a vaccine mandate on those older than 60, which was supported by Chancellor Olaf Scholz and Health Minister Karl Lauterbach.

The vote was expected to be close, as demonstrated by Scholz calling Foreign Minister Annalena Baerbock out of a major NATO meeting on Ukraine to return to Berlin and cast her vote.

However, if the government had expected the vote to sit on a knife's edge, they were mistaken, meaning Baerbock's presence was not necessary. Of 674 Bundestag MPs, 378 voted against the vaccine mandate, while 296 supported it.

The measure's rejection was a major blow to Scholz and his governing coalition, consisting of the chancellor's Social Democrats (SPD), the Greens and the neoliberal Free Democrats (FDP).

Schloz opted to let lawmakers propose the vaccine mandate measures and vote on them freely, as opposed to letting his cabinet bring its own proposal forward.

But this allowed members to vote their conscience and several senior FDP members came out against mandating vaccines, joining instead the conservative opposition CDU/CSU in rejecting the measure.

After the vote, politicians traded blame, with SPD and Greens members furious with the FDP for not committing to the goals of their coalition and also with the CDU, for not allowing its members to vote their conscience, which they said could have delivered more votes for the measure.

Lauterbach: 'We move on'

Health Minister Karl Lauterbach reacted to the failure of his preferred policy choice with concern.

"It is a very important important decision, because now the fight against corona in Autumn become much more difficult. Laying political blame does not help. We move on," Lauterbach wrote on his twitter account.

The German Hospitals' Association (DKG) reacted to the vote with disappointment. "At the end of the day we're now standing in front of a pile of rubble, for which every party shares responsibility," DKG chief Gerald Gaß said.

He added that the effort was doomed to fail, when Chancellor Scholz left it up to the legislature to sort out the question of mandates, as opposed to his cabinet offering up a plan.

Proponents sought to prepare for fall

Social Democratic Party MP Dagmar Schmidt introduced the legislative proposal, encouraging members to vote for the measure, saying "today is not about what's happening now, but what will very likely happen in the fall."

She added that it was important to have a foundation of large-scale immunization to face a larger outbreak later in the year.

Greens MP Janosch Dahmen urged the Bundestag consider the science showing that those over 60 years old were very vulnerable to severe disease from COVID-19 infection.

Dahmen said the Bundestag also had a responsibility to listen to the majority of Germans who have come out in support of the vaccine mandate.

But the opposition center-right CDU argued that a vaccine mandate was not necessary, given the fact that cases were going down across the country.

CDU MP Tino Sorge told the legislative body that since the current situation did not show an overwhelmed health care system, nor an emergency situation in the intensive care units, it was not necessary to impose vaccine requirements.

Sorge added that a vaccine mandate would not help in the fall if a new variant of the various, likely resistant to vaccines, takes hold.

Senior member of the FDP, Wolfgang Kubicki also spoke against the mandate echoing Sorge's point about variants but also adding that vaccines "would not help us reach heard immunity" and saying it was unconstitutional to force adults to have the jab. "It is not the job of this house to protect adults against their own will," Kubicki said.

Far-right leader Alice Weidel said the vaccine mandate was "not just radically hostile to the constitution, but a totalitarian measure." Weidel told the Bundestag that a compromise on the vaccine mandate for those over 60 was a "trojan horse," framing the policy as a measure to give the federal government more power over citizens' freedom.

Already, vaccination is obligatory for health care workers. But further expansion has sparked a wider debate in German society.

A recent opinion poll revealed that 60% of Germans support a vaccine mandate; although fewer believe this can actually be achieved.

The vote in the Bundestag came as Germany has now lifted most of its major coronavirus restrictions, after the legislature voted to end them and allow states to make their own decisions on the matter.