Germany set to relax COVID restrictions | Germany | News and in-depth reporting from Berlin and beyond | DW | 15.03.2022

COVID-19 infection figures across Germany are higher than ever. Nevertheless, the country is relaxing the restrictions and hoping for a mild spring. 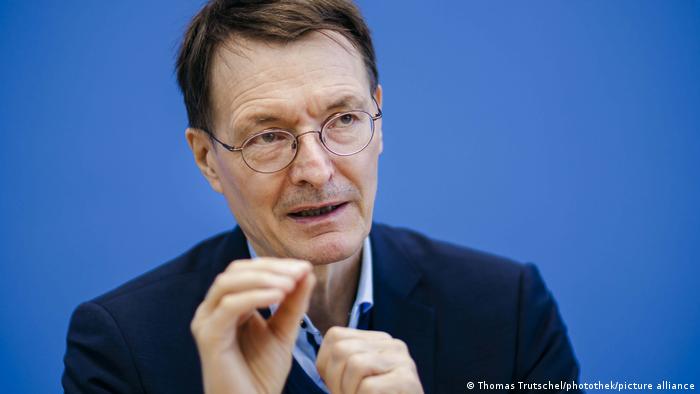 German Health Minister Karl Lauterbach has long warned of the seriousness of the coronavirus. Since the beginning of the pandemic, the epidemiologist and member of the Social Democrats (SPD) has been a go-to expert voice in government on the virus.

He took over the Health Ministry when the new government of the center-left SPD, Greens and neoliberal Free Democrats (FDP) came to power in December 2021. But the government has diverged from the health minister's warnings and decided to largely reduce the pandemic restrictions nationwide starting March 20. And this is despite the fact that the number of infections keeps climbing to new record highs. The seven-day incidence rate for every 100,000 inhabitants stands at well over 1,500 across the country.

How do Germans feel about a blanket COVID vaccine mandate?

Between hope and worry

The omicron variant of the virus is producing mostly mild courses of illness, especially in vaccinated people. And currently, 75.7% of Germany's population has been vaccinated at least twice. That's too few to defeat the pandemic, but too many to maintain current restrictions.

Spring is coming, and people are meeting more outdoors again. Nevertheless, Lauterbach remains skeptical, as he said in Berlin last Friday: "We cannot be satisfied with that. It is a situation that I would like to describe as critical. We have a sharp increase in the number of cases. We cannot be satisfied with a situation in which between 200 and 250 people die every day. The situation is objectively much worse than the mood."

Nevertheless, the federal government wants to reformulate the Infection Protection Act this week, thereby significantly reducing the measures that the country's 16 states can still impose in the future.

The previous rules expire on March 19, and, without a new decision, there would be no more possible measures. If the law is changed as planned by the government, only a few requirements will stay: masking will still be required nationwide on airplanes and public transport, and in retirement homes and hospitals. In medical clinics and other health care facilities, COVID testing will continue to be necessary. And if certain hotspots develop, the states can decide on stricter measures, but only then. In general, the loosening of restrictions will mean that all people — vaccinated, unvaccinated — are allowed to visit leisure establishments including restaurants, bars, theaters, and cinemas.

Will there soon be medications for long covid?

Many states feel overwhelmed by the federal government. Numerous specialist organizations and medical associations are also expressing concern. Lower Saxony's State Premier Stephan Weil (SPD) said in an interview with the public broadcaster NDR that higher vaccination protection was necessary in order to really get away from the high number of infections in the long term. But the rate has it has long stagnated at around 75% of fully vaccinated people, and there are very few new vaccinations.

If, for example, a new, more dangerous variant than omicron comes along, stricter measures are likely to come into play again in the fall, Weil said. "We shouldn't go into a third after two years of corona without having learned from it," he says. In general, many state premiers are complaining in private that there is a far less open discussion between the states and the federal government than under former Chancellor Angela Merkel.

It is above all the laissez-faire FDP — the smallest party in the governing coalition — that has upped the pressure to scrap most of the restrictions. And numerous lawyers had advised the government that some restrictions, such as contact bans for the vaccinated, were legally tenuous. According to the health minister: "In my opinion, that's progress. Because if the government and the state parliament decide that about the possible hotspot, then [the bans] will certainly have their day in court."

Vaccine skepticism in Germany - what's behind it?

In addition to the Infection Protection Act, the possibility of compulsory vaccinations in certain sectors of society is increasingly coming into focus. Starting this week, people working in health professions must get the COVID vaccine. People working in nursing homes or hospitals have until Tuesday to prove they have recovered or been vaccinated. However, Lauterbach is still promoting a general obligation to vaccinate, which the Bundestag, Germany's parliament, will also discuss in different variants this week: "I am always confronted with the argument that 'Omicron is not that dangerous. We don't need an obligation to vaccinate.' That is wrong."

Jördis Frommhold, the chief physician at the Median Clinic in Heiligendamm, said it was not right to give the all-clear now. Lauterbach had invited her to the press conference on Friday in Berlin. In her clinic, Frommhold mainly deals with patients who have to deal with the consequences of Long COVID after surviving the initial infection: "I remember the 40-year-old triathlete, who had a mild course. And now a slow walk of 20 minutes is a challenge and almost impossible for him to master."

The Bundestag aims to discuss the new Infection Protection Act on Wednesday and vote on it on Friday if everything goes as planned. But it remains to be seen whether parliament will later decide to make vaccination compulsory, as the health minister wishes. "Unfortunately, it's like this: With the high number of unvaccinated people in Germany, the pandemic is not over yet," Lauterbach said. But, for now, the accompanying restrictions on public life are to be relaxed — with an uncertain outcome.

How have children fared in Germany in the latest wave of the COVID pandemic?

Although data indicate that the omicron variant has been less severe for children, they still face risks — including long COVID or inflammatory syndrome. Experts are urging prioritizing kids' well-being.