NATO chief Jens Stoltenberg said the alliance is committed to supporting Ukraine and "preventing escalation" after Kyiv appealed for allies to quickly supply it with more weapons. 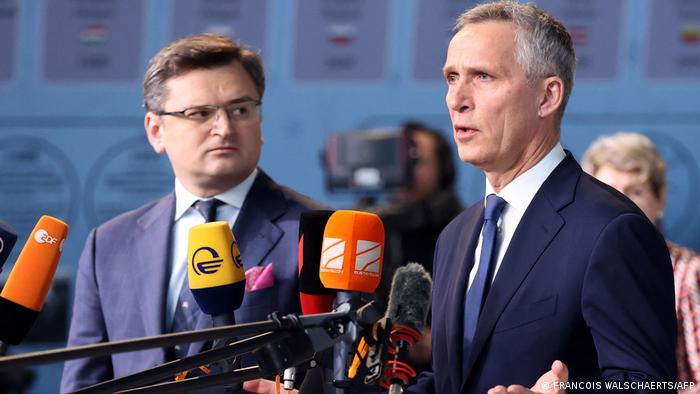 NATO Secretary-General Jens Stoltenberg said on Thursday that the alliance is stepping up support for Ukraine and its neighbors "in many different ways."

His remarks came as foreign ministers of the NATO alliance, as well as Ukraine, the European Union, Finland, Sweden, Japan, New Zealand and Australia, concluded a two-day meeting.

The diplomats convened to maintain broad backing for sanctions against Russia and arms supplies for Ukraine in response to the Russian invasion of Ukraine.

What did Stoltenberg say?

Stoltenberg said NATO countries, but not NATO as an organization, are supplying many kinds of arms and other support to Ukraine but that the 30 allies can do more.

He said the support includes military assistance, as well as humanitarian and financial aid to Ukraine and neighboring countries. He did not provide details.

Still, Stoltenberg insisted that NATO's main responsibility is to protect the alliance's members and prevent getting dragged into a "full-fledged war with Russia."

"NATO is not sending troops to be on the ground. We also have a responsibility to prevent this conflict from escalating beyond Ukraine, and become even more deadly, even more dangerous and destructive,'' he said.

Stoltenberg: 'No indication that Putin has changed his ambition'

Speaking to reporters shortly before Stoltenberg, Ukrainian Foreign Minister Dmytro Kuleba said: "My agenda for the discussion [today] had only three items: it is weapons, weapons and weapons."

Ukraine's top diplomat said by helping Ukraine defend itself against the Russian invasion, NATO is also investing in its security, "so that President [Vladimir] Putin will have no chance to test Article 5 of the North Atlantic Treaty."

He was referring to the collective security agreement, which stipulates that an attack on one member of NATO is seen as an attack on all of the others as well.

Kuleba said he was "cautiously optimistic" that some NATO members would increase their weapons supplies to Ukraine. He declined to say which countries would be providing equipment or what kind it would be, but he said the weapons must get to Ukraine quickly.

"Either you help us now — and I'm speaking about days, not weeks — or your help will come too late."

Ahead of the meeting, Kuleba had urged Germany, in particular, to do more in terms of arms supplies to Ukraine, "given its reserves and capacities" and that decision-making was taking too long. "While Berlin has time, Kyiv has none," he said.

Germany's Foreign Minister Annalena Baerbock left Thursday's meeting as she was summoned by Chancellor Olaf Scholz to vote for a COVID vaccine mandate — which ended up failing in parliament by a landslide.

US: 'We must assume' more atrocities taking place

US Secretary of State Antony Blinken said there is growing evidence of "atrocities" by Russian soldiers in Ukraine.

Speaking at the end the NATO meeting, Blinken told reporters there are "more and more credible reports of rape, killings and torture."

"For every Bucha, there are many more towns Russia has occupied and more towns that it is still occupying," Blinken said. "Places where we must assume Russian soldiers are committing more atrocities right now."

He added that Washington is working to secure the evidence and documentation "to ensure people are held accountable for their crimes."

Washington's top diplomat added that the deaths of civilians in Bucha and elsewhere have horrified NATO members.

"The revulsion at what the Russian government is doing is palpable," Blinken.