Ursula von der Leyen has asked online retail giant Amazon to provide details on working conditions - especially for seasonal staff - as soon as possible. The company's under scrutiny after a damning documentary. 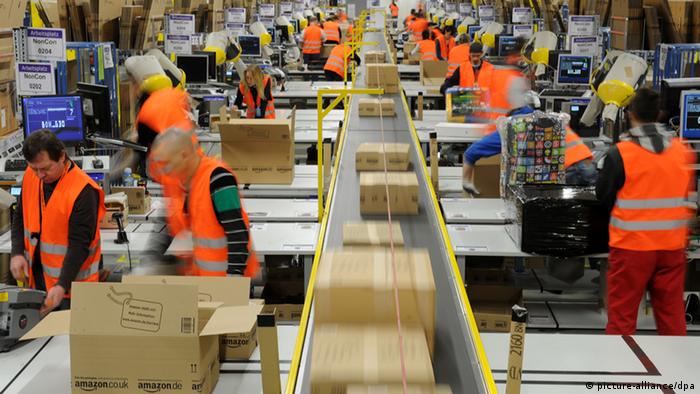 "These are serious allegations, which is why all the facts need to be put on the table as soon as possible," von der Leyen said in an interview published in the "Welt am Sonntag" newspaper.

A half-hour report aired on Wednesday highlighted working conditions at three Amazon distribution centers, mainly an outlet at Bad Hersfeld in the state of Hesse. The head of Hesse's labor agency, Frank Martin, had demanded similar action from Amazon on Friday.

Amazon released a statement pledging to investigate the allegations in the report, including those aimed at temporary employment agencies that hire seasonal staff on its behalf.

"Should the special investigation find that there is some substance to the allegations against the employment agencies, then their licenses could be at risk," von der Leyen told the Sunday paper.

The film displayed living and working conditions for a collection of temporary Amazon staff brought in for the Christmas rush, mostly from southern or eastern Europe. It showed cramped accommodation - shared by strangers - unreliable bus services to and from the Amazon outlets, and a heavy security presence from a company called Hensel European Security Services - including impromptu searches of staff accommodation. The film also showed staff wearing company jackets with "H.E.S.S." on their chests. The company was hired by an Amazon subcontractor, not Amazon itself.

The program also said it had found far-right ties in the case of one security staff member, and questioned a possible allusion to Rudolf Hess, Adolf Hitler's deputy, in the company name.

"We reject the allegation that our company harbors far-right views or supports such views," Hensel European Security Services wrote in a statement, also confirming that some searches had taken place. The firm said the searches were for the "documentation of potential damages or missing items," conducted at the request of the accommodation companies in accordance with German law "in order to protect the property of the hotel or accommodation owners from theft or damage."

Germany is Amazon's second-largest market. The company recorded sales of 6.8 billion euros ($8.4 billion) in 2012, also making it the e-commerce market leader in Germany.