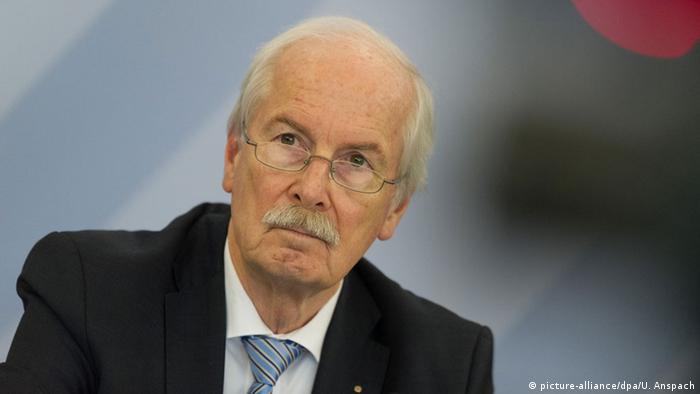 Justice Minister Maas told a hastily called press conference at the ministry in Berlin on Tuesday that he would apply for federal prosecutor Harald Range to be granted early retirement.

Maas said he had informed Range of the decision prior to the press conference.

"I have told federal prosecutor Range that my trust in his ability to fulfill the office has suffered lasting damage and therefore, in agreement with the Chancellery, I will request his retirement today," Maas said.

The statement indicated that the justice minister had made the decision to sack Range with the support ofChancellor Angela Merkel.

Through a spokeswoman, Merkel had previously indicated that Maas had her "full support" after he expressed doubts last Friday that the action of the two journalists from the website "Netzpolitik.org" amounted to treason.

Maas also announced on Tuesday that he had nominated Munich prosecutor Peter Frank as Range's successor as a federal prosecutor.

The announcement came just hours after Range surprised many by going on the offensive in a row between himself and Maas over treason charges launched against two journalists who had published excerpts of classified documents.

Range said the Justice Ministry had ordered him to withdraw an independent expert from the investigation, who had determined that the leaked documents in the reports amounted to a "state secret," one of the requirements to pursue a treason case.

"To meddle with an internal review on the basis that the results might be inopportune is an intolerable interference with the independence of the judiciary," Range said.

Maas, though, denied this, saying that the decision to withdraw the expert had been made in consultation with Range last Friday.

The classified documents in question were about plans by Germany's domestic spy agency to expand the surveillance of online communication.

The 67-year-old Range had been due to retire early next year.

Not only had the treason investigation against "Netzpolitik.org" editor and owner Markus Beckedahl and its journalist Andre Meister drawn criticism from a number of government and opposition politicians, but earlier on Tuesday, the Organization for Security Cooperation in Europe weighed in on the matter.

Dunja Mijatovic, the OSCE's representative on media freedom, released a statement via the organization's website on Tuesday, in which she said she had complained about the case to German Foreign Minister Frank-Walter Steinmeier.

"The threat of being charged with treason has a clear general chilling effect on journalists engaged in investigative reporting," Mijatovic said in her letter.

"I believe that in cases of possible violations of confidentiality or state secrets regulations, authorities should refrain from trailing the media, whose job it is to investigate and report about issues of public importance," she wrote.

There have been growing calls from the SPD and Die Linke for Germany's federal prosecutor to step down. The outrage stems from an investigation into two bloggers accused of publishing state secrets. (01.08.2015)